Oops, She Did It Again

Twin 1, for the second time, landed in my newsfeed.

With no plans or time to post today, I was nevertheless moved to do so when I saw a face in my newsfeed that looked an awful lot like Twin 1.

Fact of the matter, it was she.

One’s heart stops a little when one sees a family member’s face in the news, as one doesn’t know if it’s something good or something bad. 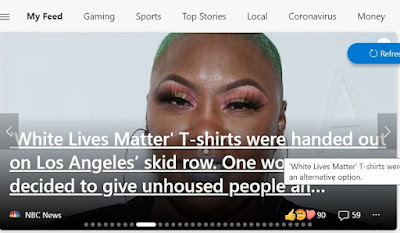 Evidently Ye — the musician formerly known as Kanye West had ordered a ton of shirts with the triggering logo "#WLM (White Lives Matter)".

Not to say White lives don’t matter. All lives and All forms of life matter, it’s just that the phrase #WLM has been coined by the white supremacists and has now been categorized as a hate slogan.

Ye appears to be in crisis since losing his Kardashian wife to comic Pete Davidson. Seemingly now desperate for attention, I guess he figured selling these shirts in his clothing line would get him the attention he so craves.

THEN came those recent antisemitic remarks on social media, which prompted the manufacturer to dump the shirts.

The manufacturer probably thought dumping the shirts on Skid Row to be a humanitarian act, unaware the shirts are triggering and can cause harm to be done to the wearer.

So, anyway, trying to get the shirts off Skid Row is why Twin 1 ended up in my newsfeed.

Before I sign off …. Mildred’s challenge yesterday was "A song from your pre-teen years”.

I was a boring, painfully shy, unhappy child during my pre-teens (teens as well). My escape was the fantasy of losing myself in the lives of others. The person that seemed to be living the life I most wanted mine to be at the time was that of Annette Funicello as a Mouseketeer. So, of course, the Mickey Mouse Club theme was my pre-teen song.

I loved the sound of Karen Carpenter’s voice. Now that I know she was struggling, as I was, her voice probably spoke to me as that of a kindred suffering spirit.


That’s it for today, I’ve lots to do and have to get cracking, so Raines out.

Posted by BootsandBraids at 8:15 AM

Email ThisBlogThis!Share to TwitterShare to FacebookShare to Pinterest
Labels: BloggingBuddies, Family, In the News