Yesterday’s bingo was a hoot and a holler.

I’m no longer about putting together a lucky outfit, because time is tight getting to bingo after working out and usually stopping by the market. Consequently, after putting groceries away and throwing together a snack to take with me, I just change into a fresh top, leggings and hustle down to the Community Room.

It’s getting crowded. Folks are showing up — some we’re happy to see, others not so much.

I won two games. First game, I opted for a plant from the prize table. 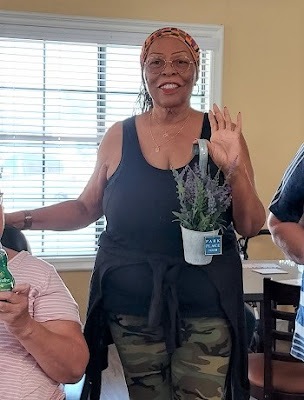 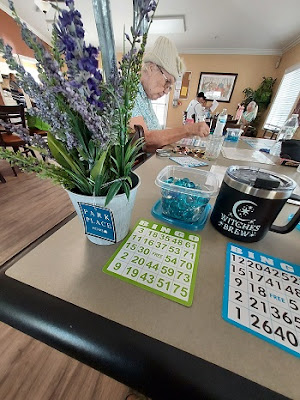 Learning it wasn’t a live plant or silk, but some kind of plastic — which is bad feng shui, I later exchanged it for a Salad-to-Go container as I’d lost the lid to the one I have.

Winning a second time, I opted for the other Salad-to-Go container because two is better than one. 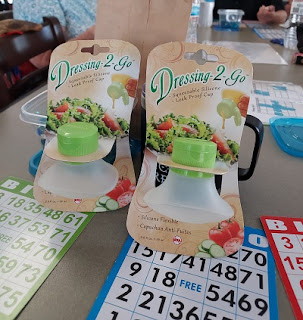 Drama came to town at the end of Game 9.

Attendees were reminded to not clear their cards at the end of Game 9 because Game 10, Blackout, was a continuation.

New attendees at the last few bingos are a non-English speaking couple. We all try to help them understand the various games as much as we can but, for some reason, the wife can’t remember to NOT clear her card on Game 9.

Just as I turned around to make sure she did NOT clear after Game 9, she was too quick and had done so despite being reminded not moments before the game started.

Red Light stepped in and attempted to help her reconstruct the numbers on the card, so she could play on.

Fortunately, the husband was good. He’d not cleared his card.

At any rate, as Red Light was trying to help, the mother of Miracle Guy turned around and yelled at Red Light, "WHY ARE YOU DOING THAT?!", like it was any of her business.

Let’s give Miracle Guy’s mom the name of Black Witch (BW) for purposes of the blog.

Red Light looked stunned at being yelled at, said "Excuuuuse Me!" and walked away from trying to help.

For those of you who are new readers, Miracle Guy is the resident who is lucky to be alive because, in his younger gangbanger days, he was shot, survived, was shot again, survived, then survived being stabbed and molotov cocktailed.

He’s a little brain damaged slow now, walks with a limp from all he’s been through, but still alive.

He has his own unit here, his mother (the BW) has her own.

After BW's outburst, bingo went on with the resident sitting across from BW winning the Blackout game.

The caller asked me to look at the card, verify numbers for the win as she called out numbers she did NOT call.

I verified the win whereupon BW said, "I won too".

"No, you did not" said I and walked away.

There was much mumbling and grumbling on her part as she moved around the room, after which she walked over to me and yelled ..... "AND YOU NEED TO STAY OUT OF MY BUSINESS!"

"I don’t respond to bullying. You picked the wrong one today", said I.

She continued to grumble, called me the B word a few times, whereupon I said, "I’m going to put a curse on you".

"You gonna do what?"

"Make a voodoo doll and put a curse on you".

She continued to mumble, grumble, call me names, so I began casting the Rebuking Spell on her.

Long time readers will remember the spell I don’t get to use often — once on our Karen resident from afar, and once on an unruly child to her face, in front of her mom where I raise my hand in a halt manner and say, "I rebuke you demon. I rebuke you in the name of Jesus Christ. Out out, evil spirit. Release this body and let it go".

Towards the tail end of rebuking her, I thought to record the occurrence for you.


She mumbled and grumbled her way to the office (Manager No. 10) to complain about being mistreated.

She doesn’t have a leg to stand on. She certainly can’t use the old lady card because I think I’m older than she, just in better shape. Plus, I’ve got allies.

After she left the manager's office, the Baker went in to see if bingo would be discontinued because of the complaint.

Manager No. 10 said she wasn’t doing anything with what BW had to say. That she’s only concerned with fights and loud arguments.

Since it was neither, we’re good, but Red Light is worried BW will cause trouble in future and wants her banned from bingo.

I envision her returning on principle, just to try to push her considerable weight around, bully others.

The “B” word doesn’t faze me. So, she can return and try to rattle me as many times as she’d like without success.

However, because there’s the possibility of her being 51/50, I will take the precaution of not sitting with my back to her in case she becomes violent.

If needed, my next spell will be to erase her.

That’s where I hold a hand up, think of that hand as an eraser, swipe it in front of me as though erasing words from a chalkboard, only I'm not seeing a chalkboard but a person and say "Erase, erase, erase" as I erase her away.

Don't ask me where I get this stuff from because I don't know, except maybe from all the old corny vampire movies I like to watch.

If all else fails, a voodoo doll will be made. After all, I did make a voodoo doll of No.45 when I got fed up with his shenanigans, and who can say that doll is not one of the reasons his life is steadily falling apart, indictment and jail getting ever closer.

All in all, bingo was fun. I thoroughly enjoyed interacting with BW, letting her know that bullying and being an Angry Demander is not always going to result in people backing down and running away, like Red Light did, nor in people acquiescing and giving her what she wants.

Posted by BootsandBraids at 2:00 AM