After returning from the Pain Cave yesterday, I had to really hustle, because there was a notice on the door of water shut off scheduled for today, 8:00 am to 3:30 pm.

Evidentially, two main lines are broken and need to be repaired.

Since I, unlike other residents, can’t just go to the fast food place for meals, or drink bottled water, I had to pre-cook meals for today so, unable to cook if water was involved, there would be no cooking, just reheating.

I set the coffee pot up with water and grinds, so all I had to do this morning was plug the pot into the outlet.

I ran water through the Brita Filter Pitcher to fill not only my drinking thermos, the pitcher itself, but set up several backup cups of filtered water in Dixie-to-Go Project Runway Limited Edition cups I’d almost tossed last week, because I was in a clearing out mood — rid myself of items held onto, but not used in some time. 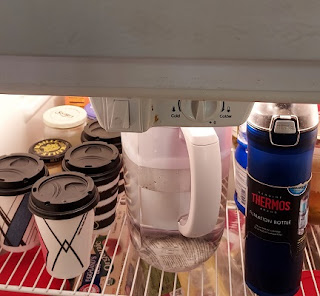 Project Runway fans might recognize the cups as being based on Brandon's Season 16, Episode 9 winning design — aired in 2017. 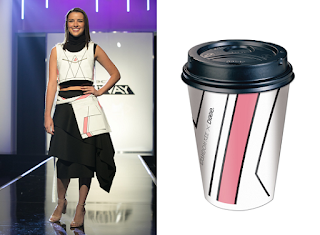 It's more than annoying when I’ve held onto something, finally let go, got rid of it AND immediately after find a use for, wish I’d held onto just a bit longer. Fortunately, this time something stopped me from trashing the cups.

Knowing the water would be shut off at 8:00 this morning — maybe earlier if the plumber so saw fit, I set the alarm for 6:00 so I could shower without fear the water would end while I was still all soapy.

So as of now, a little after 7:15 am, she ready, as I've showered, had breakfast, slapped on some makeup and am now watching the disturbing news, coffee cup in hand, that Bill Cosby is out of prison while Brittany is still, in a sense, locked up.

Heading to the Pain Cave for yesterday’s workout, I ran into Jan.

The Talker’s brother has what I can only describe as a mobile food bank. The back of his truck is filled with what looks to be fresh fruit, vegetables, drinks, and a lot of other stuff I’ve never taken the time to peruse, though invited to take whatever I wanted — as I’m usually headed for my workout without the time to stop.

Evidently, the brother takes his load to a church foodbank with a stop here for his sister to take what she needs, and she invites others she sees out and about when brother is here, to take what they need.

No set schedule that I know of. It just happened that twice, when I was headed to the Pain Cave, the brother was here with his load.

At any rate, Jan was at the brother’s truck and I happened to look over just as she wrapped her hand around a rather large cucumber and said something to the brother that had him laughing out loud.

The way Jan was handling that cucumber, it didn't take much imagination to guess whatever Jan said was naughty in nature, so I walked over, said, “Is Jan doing something naughty?” to which the brother laughed even louder, saying, “Did you see that?”

”I most certainly did”, said I with a grin.

Jan got such a kick out of my telling her how I’d turned her dance rock display into a quiz.

She said she knew ALL the dances, even the fox trot, because she took dance in high school and later worked as a dance instructor.

So Jan is not only a sweet lady, but a little bit naughty (cucumber) and interesting.

I forgot the name of the studio she taught dance, but it was similar to what Arthur Murray studios used to be.

Lastly, while at Macy’s last week, I happened to see a bling sandal on sale that matched one of my masks.

Unfortunately, my size was sold out which I thought good, because it would have been an impulse buy. I saw it, I wanted it, even though I didn’t need another pair of sandals.

However, once back at the complex, I couldn’t stop thinking about the sandal, got online, found ‘em through another source — not on sale, actually twice the price, but hey, I was meant to have ‘em. 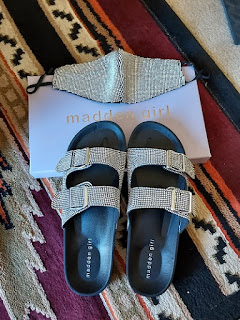 She most definitely Is Ready ... and ready in style.

Posted by BootsandBraids at 7:30 AM

Email ThisBlogThis!Share to TwitterShare to FacebookShare to Pinterest
Labels: In the Kitchen, In the News, Neighbors, On TV, Outage, Painted Rocks