It took a while, but wanting to know how Walmart Karen and Victoria Secret Karen were to be dealt with, I did a little research this morning and stumbled upon a thread that led me to information that Walmart Karen has been placed on leave by her employer. 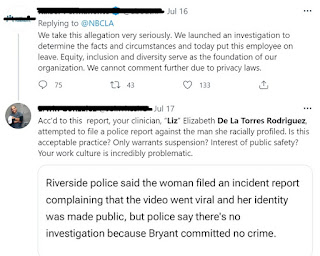 How incredibly stupid is that!

Not only did she profile the guy as having stolen her son’s phone and, when a simple, “I’m so sorry. I made a mistake” would have sufficed, she not only failed to apologize when the son found his phone in the car, but instead opted to hurl a profanity at the guy she’d erroneous profiled as she walked away, she then followed up with trying to get HIM arrested.

Seriously, this woman is ill.

One would never guess that her job is that of a mental health professional, which I thought hilarious, as did a number of folks who commented on her employer’s Instagram page.

Her employer’s Instagram has literally thousands of comments in response to images they’ve posted touting various services offered that, because of her actions, are deemed a joke.

One image on her employer’s page is reminding clients to protect their skin from the sun.

One commenter wrote, “Yep don't want to get too dark. Liz might come after me”.

Comment to that was, “Your own employee seem to be the one that needs the help”.

So, thus far, Walmart Karen has embarrassed her employer and made matters worse for herself on the whole.

Once she stops looking outside herself, blaming the victim for the mess she’s in, and begins to reflect inwardly, perhaps she’ll learn her lessons — 1) to be careful about profiling others, 2) apologize if you do and are proven wrong and, more importantly, 3) don’t wear a shirt with your employer’s logo while out and about behaving badly.

Nothing new on the other Karen, the one that threw a fit at Victoria Secret, but there is a disturbing story about a Black woman travelling with her 4-year old White adoptive sister who was profiled as a child trafficker.

In the woman’s words, “There were two police officers, and they came up to me and said, ‘Is it okay if we talk to you?’”

“One officer asked Olivia (the 4-year old), if she knows me and what am I to her, and he asked what my mom was to her.” A series of other questions followed, then officers spoke with her mom and a social worker to confirm certain pieces of information. Once information was confirmed, officers followed the pair to baggage claim before speaking with the person who picked them up.

So, though the police were polite, and had to respond to someone reporting what they deemed suspicious — a Black woman travelling with a White Child, the question is …. Would it have been looked upon as suspicious had the child been with a White woman AND, after the officers verified information given them, did they have to continue following, embarrassing, even further questioning the person who picked them up?

Now burning up a little inside, in no mood to sit quietly and needlepoint, I'm thinking of burning off my frustration with this kind of crap by tackling a few organizational projects. Tossing stuff out should be therapeutic ... and productive.

Posted by BootsandBraids at 10:39 AM