Guardian of the Rock Garden

Hearing the sounds of the landscaping crew yesterday, feeling protective of Jan’s rock garden, I stood guard in the patio window.


One landscaper edged the grassy areas, the other used the blower to clean up behind the first guy, neither touched the painted rocks.

Lucky for them because, I was prepared to yell had they dared.

Actually, they appeared to have cared less, showed no interested in them whatsoever as the rocks did not interfere with their duties. Which confirms Community Manager was lying when he told Jan the landscapers were complaining.

Last time I caught Jan in the act, she said her friend that wants to teach line dancing to us seniors, was going to provide her with a fresh batch of rocks.

I guess he did, but she didn’t say they were going to be boulders, because the two additions I mentioned in the video are HUGE, and they appear to be rough, porous, in their natural rock state — making it difficult to paint on.

Taking a closer look, the one on the left says You Are Talented. 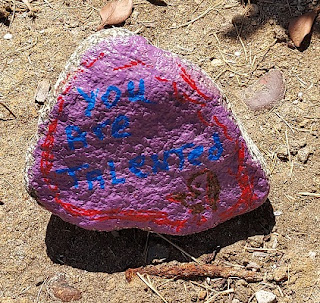 I'm glad that I don't have time to take on painting rocks because, if I did, I'd probably write something controversial, like BLM or, at the very least, something that would tick folks off.

For instance, instead of "You are talented", I'd have thought it would be devilish fun to paint "You is smart. You is kind. You is important". ROFLMAO!

On the right, we have Run and Play. 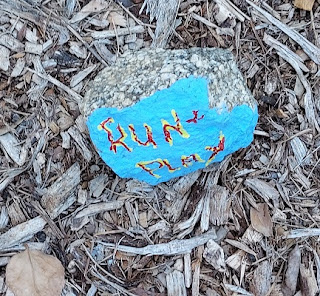 I began hearing noises like the plumbers were here shortly after 8:15 yesterday and, around 8:30, the water was shut off.

The outage was painless.

I had everything I needed to do done long before the shutoff and there was no having to cook lunch when I returned from the Pain Cave, because I had coffee and a salad waiting for me.

Waking up from a nap, just in time to watch Judge Judy, I checked and the water was back on.

So, unless, we get a notice from management that there’s more to be done, looks like repairing the broken lines are a done deal.

Posted by BootsandBraids at 7:34 AM