Oops! He Did it Again

Back in June, the treadmill in the Pain Cave moved from the back of the main room to the front of the main room, closer to the entryway door — which, Trainer assured me, was not a subtle way of trying to get rid of me.

That was the 4th or 5th move in the almost two years I’ve been training with him.

Now he’s done it again, bringing the total moves to the 5th or 6th time.

The treadmill is still close to entryway door, but switched from right side of the door to left side.

Actually, in the language of Feng Shui, it’s a good move, because the wall in front of me is the Wealth/Prosperity position, the wall to the left is the Family and Physical Health side.

I can do without the flow of energy improving family relationships — I’m better off without them, but I can always use improvement in the Prosperity and Physical Health areas.

Trainer says I’m the only client using the treadmill and, but for me, he’d get rid of it.

Because of my age, high-energy warm ups — like running, high knees, jumping would do more damage than good, but I do enjoy jumping rope, though the last time I did so was in the gym of the company I retired from some nine years ago, so I'm willing to try, but Trainer says no. He’s afraid I’ll injure myself, so treadmill it is.

In fact, when I mentioned to him that I was trying to learn some of the TikTok dances, he asked me to cease and desist because, as he puts it, “You’ll hurt yourself”.

I told him I would cease/desist, but I lied. Still at it, LOL.

At least, Trainer had a valid reason for this move. He’s moved that roll-up desk I thought might be valuable, left behind when he bought his partner out of the business, to the front and created a reception/desk area. 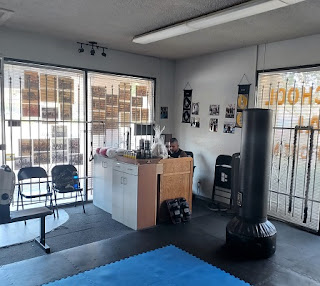 Hopefully, it’s the last and final move for the treadmill.

I had Trainer laughing today when I told him of my issue with the Security Guard at the market.

The market used to have workers standing at the door, to ward off non mask wearing customers. In this age of people being desperate, I guess the market had something bad happen because, a couple times, I saw armed guards, dressed in what looked like body armor, at the door. That was probably too intimidating for shoppers so, for the last two months, it’s been an unarmed security guard, in a normal uniform.

Maybe it’s just me, because others seem to enjoy him, get into conversations with him, but I find it annoying, especially since something about him COMPELLS one to respond.

At first I didn’t. I’d just ignore him and, when I first finally responded, because I felt I had to, I heard him say to himself, "Awright" as though it had been a challenge and he was pleased he'd gotten me to speak.

It’s just so annoying to have to be sociable when all I want to do is make groceries.

Annoyed moved up to Uncomfortable when, on one of the excessive heat days, I was shopping in biker shorts, rather than my usual leggings.

As I exited the market, he gave me his usual "Have a nice day" and then I heard him mumble "Mmmmmmm".

In telling Trainer about this, how uncomfortable it made me feel, and how now I’m thinking of changing my shopping hours to end of Security Guy’s shift, Trainer laughed at the "Mmmmmmm" and said, "Maybe he was eating something, or thinking about ......." — and here you'll have to read between the lines, use your imagination, because I can’t repeat the naughty thing Trainer said which, though naughty, was probably correct.

At any rate, with plans to head across the street for a few items after this morning’s workout, I told Trainer I was dreading having to deal with the Security Guard, but it would be the last convenient trip, that I’d be changing my routine, go out of my way to shop late afternoon, which I figured was end of Security Guard's shift, and that I’d try to send him a picture of the guy.

Today was my lucky day because, as I parked the car, here comes Mr. Security Guard walking across the parking lot, right in front of my line of vision, heading out to break or lunch (I supposed).

I reached for the phone to get that pic for Trainer, but wasn’t fast enough. He was almost out of the line of vision by the time I got the phone. 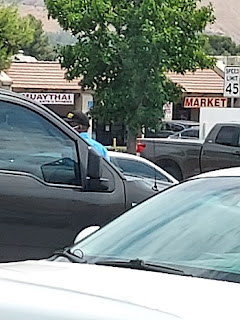 Once the coast was clear, I hurried into the market, did my shopping quick/fast/in a hurry, and was back in the car when I saw him walking back across the parking lot, heading back to work.

I snapped a photo, sent to Trainer with a note about how I’d lucked up. 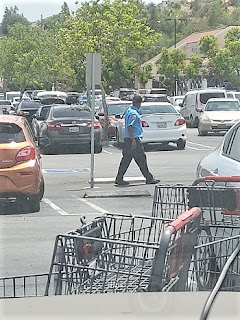 Just an average day in the life of this senior citizen. There’s always something.

Posted by BootsandBraids at 7:12 PM