Tales of this Past Weekend

I almost reached my goal of not facing the outside world all weekend, not leaving the unit, but not quite because, receiving notice the books I’d ordered were ready for pick up, I headed out early Saturday morning to handle that errand.

I wasn’t the only one up and out early, to beat the heat because, driving away from the complex, I spotted Greedy Grabby walking back from the market.

It’s been a while since she’s been mentioned in the blog so, by way of clarification, Greedy Grabby is the resident that behaves as though everything is about her, for her, that the rules don’t apply to her — is going through life with a Princess Complex.

She’d come to potlucks and, instead of bringing a dish, she’d fill up a plate for herself, her husband, have a good time, take a plate or plates to go.

On free pizza day, everyone told to take only one so everyone could get a pizza, it was always a battle for Activity Director to keep Greedy from grabbing more than her share.

Greedy would come to Easter Egg and Cookie decorating classes and, instead of following instructions to bring her own boiled eggs or cookies to decorate or exchange, she’d look around at what others had, point and say “I want that” and others would acquiesce to her.

Then there was that time she created chaos in the craft room.

Greedy is from Syria and, not knowing her background, there’s the possibility that she does come from high birth, especially since she has an entourage of ladies, seemingly from the same country, who treat her as the Princess she obviously believes she is.

The entourage hangs on her every word.

That word got Greedy Grabby and her entourage banned from the local Senior Center, when they were caught raiding the Center’s storage area.

At any rate, seeing her walking down the street, I can put a checkmark by her name as another OG who is present and accounted for post-pandemic. However, she was walking alone — no entourage, which is unusual. So I don’t know if her fan base are still residents.

Since I was out and about, I stopped for gas.


The gas station was the one where, stopping in some time ago, I’d spotted a bitcoin machine.

I'd previously commented on a blogger's site, a blogger who'd also seen a bitcoin machine, that next time I was in that gas station, thinking it odd that it would be located at a gas station, instead of somewhere more sophisticated, I'd ask the attendant if anyone ever used it, but I didn't ask.

It looked like the station had cut down on staff.

Gone were the three young friendly faces I'd seen before. What was left was one lone grumpy faced middle aged guy, who gave me a hateful look when I entered the premises.

Not knowing if it was because he hated his job, hated Black people or was just crazy, and since I was alone in the store with him, I limited the conversation to $20 on No. 8, took a photo of the machine and got the heck outa there. LOL. 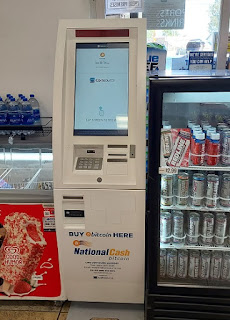 Thinking about it later, it's very possible the lone attendant was the owner, and his hateful look the result of this post pandemic thing of workers no longer willing to take crap. Maybe all his young friendly workers didn't like the way he looked at them either and quit, leaving him to grudgingly fend for himself.

Taking the streets back to the complex, rather than the freeway, so I could drive by the Civic Center, where there’s a ton of PokéStops, I managed to snag a new Pokémon. 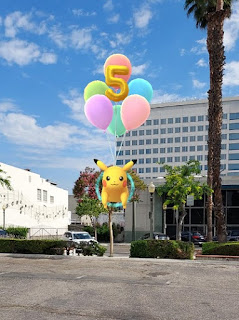 Research tells me it’s a Flying Pikachu, and the 5 indicates the 5th anniversary of the game.

With a start date of July 2016, it seems so — which is longer than I've been able to stomach a relationship, some jobs too.

After capturing that Flying Pikachu, headed back to the complex, stopped at a red light, I thought my eyes were deceiving me when I spotted something weird. 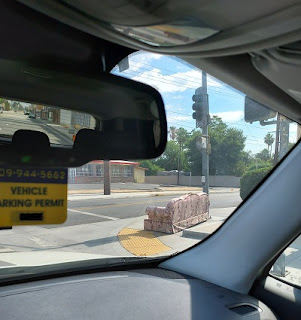 Pulling over and around to get a better look …. It was no mirage. 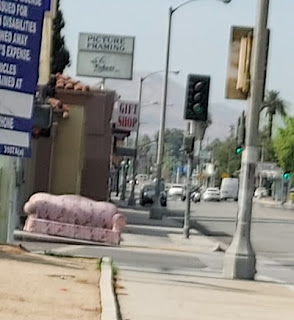 What an odd location for someone to dump a couch or .... did it fall off a moving truck?

So that was my weekend.

I don’t have much time for reading, but I did recently finish Walter Mosley’s latest, and the RuPaul book I'd held onto for 26 years before getting around to reading (I’d purchased in 1995).


Mosley’s book had me on the edge of my seat, holding my breath in suspense, as is usual with his books, and Ru’s book was a revelation.

I don't know what took me so long to get around to reading it, except it got lost in a container of books and I'd forgotten I even had it, but I'm glad I read it. 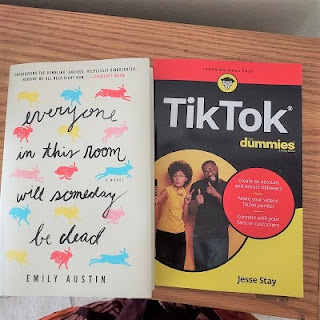 Posted by BootsandBraids at 6:20 AM