Post pandemic, it’s not so easy to pass on books that I outgrew many moons ago, of a spiritual nature.

There’s always someone somewhere, starting off on the path, that can benefit from what I have, but reaching those persons isn’t as easy as it was pre-pandemic, when I could drop them off at a metaphysical bookstore or pile up on a table at one of my meditation retreats and watch them disappear into eager hands.

Meditation Retreats are a thing of the past, for now, and I don’t believe the books to be the type to donate to the local library, not to mention donating books to the library has now become a complicated process as well, and it appears the used bookstores I used to donate to are no longer in operation.

I reached out to a Meditation Center in Lincoln, Nebraska, run by an individual on the path I used to communicate with. His groups are pretty much closed down, but he’s going to check with a few folks he’s still in contact with to see if there’s any interest there.

It’s criminal to throw books away, especially books no longer in publication but, if some other way of disposal doesn’t present itself, I may end up committing that crime.

Reading back through that old journal, I’m surprised to see the work experience was far worse than I recall and though all the Witches were awful, Henrietta seemed to have been the main antagonist and the most disturbed.

Towards the end of 1990, she went bat $hit crazy. What follows is the excerpt about that.

"There was the time when I was learning to make mop dolls. When Henrietta saw the one I made for Shirlene’s birthday, Henrietta asked me if she could pay me to make one for her. I couldn’t tell Henrietta I was making her one for Christmas, so I stalled by saying I’d consider it after Christmas because I was going to be tied up making dolls as gifts until then".

"Then Connie asked me if she (Connie) could pay me to make a mop doll for her. I wasn’t making Connie a doll for Christmas, because Connie was not one of my bosses, so I let Connie purchase a doll. Henrietta saw Connie’s doll and got all tight lipped and yelled at me right in front of Connie, ‘I THOUGHT YOU WEREN’T GOING TO MAKE ANY FOR SALE!’. Connie and I were stunned and just stood there for a second with our mouths open in disbelief. Connie and I both were embarrassed, so Connie just quickly put her doll away and took it home that same evening, without showing it to anyone else in the office".

"Henrietta was so angry at me for making a doll for Connie that Henrietta punished me for 4 months running, right up until Christmas. Henrietta punished me to the point where I crossed the line and moved from pity, to uncomfortable, to dislike, to hatred for Henrietta. Whatever little bit of respect for Henrietta I had managed to hang onto up until then, just all flew out the window. Henrietta punished me to the point where my New Years Resolution was not to allow Henrietta to yell at me ever again — I actually wrote that down on my goals list — and I followed through with that. Whenever Henrietta started browbeating me after January 1 of 1991, I would simply get up from my desk and quietly walk away. In the interim, Henrietta punished me to where I didn’t even want to give Henrietta the damn doll I had made, but could find no graceful way of giving Joyce her gift without giving Henrietta one, but I made a vow to myself that it would be the last thing Henrietta ever got from me — and by God it was! And I also never again took anything from her, not even a lunch or a cookie, and anything and everything that was in my apartment Henrietta had ever given me was gotten rid of”.

"On that initial day when that particular period of Henrietta’s intense anger over the doll began, Henrietta was so mad at me that Henrietta walked around the entire rest of that day tight mouthed, and giving me those hard, nasty looks and spitting words at me. Henrietta was so angry that Henrietta had done a document earlier for Dan that she told me to attach a particular manila file to — which of course I did. Henrietta was walking around her office enraged and muttering to herself about Connie’s doll when Henrietta spotted a manila folder. Henrietta ran over to my desk and started berating me that ‘DIDN’T I TELL YOU TO blab bla bla !!’"

"I said I did give Dan the file. Henrietta sucked in her breath as though she couldn’t believe what a liar I was, got all puffed up and shouted, ‘I BEG YOUR PARDON!’ and proceeded to infer to my face that I was lying because ‘I HAVE THE FILE RIGHT HERE IN MY HAND!' I was shocked and in that semi dazed state I’m always in when Henrietta has beaten up on me non stop all day, so I just kinda said that I had given Dan the file she’d told me to give him, but that if she wanted me to also give him the file she held in her hands, I would. At that point, Henrietta opened the file, looked inside, and that confused embarrassed ‘why do I always do this’ look washed over her face, and Henrietta said ‘Never mind. This is just some old notes.’ Henrietta ran back into her office, sat in her chair staring off into space looking confused. As Henrietta was running back to her office, I heard her say to no one in particular ‘Why do I do this — what’s wrong with me?’”

What was wrong was she was insane. If that woman is still alive today, it would not surprise me to learn she’s institutionalized.

Did anyone hear her tirade?

The Office Manager heard it, Henrietta's boss Jane — the Head Attorney heard it, as did other attorneys and secretaries. Everyone always heard, but it was an embarrassment for them, so no one in power wanted to get involved. The other attorneys would give me a sympathetic look, and the other secretaries did their best to avoid all contact with Henrietta.

I don’t remember what Henrietta's mop doll looked like, but I usually personalized the dolls to fit the person’s skin tone, manner of dress, personality. For instance — if the person was into cats, everything would be the same insofar as dressing a regular doll, but I’d put a cat face on the doll and a tail. If the person wore glasses, I’d put glasses on the doll. Henrietta was a beoch, so I just can’t remember what I’d designed for her — it should have been a witch, but wasn’t.

If you’re unfamiliar with mop dolls, I have no photos of those I’ve made for others, but I do have a photo of one I made for myself. 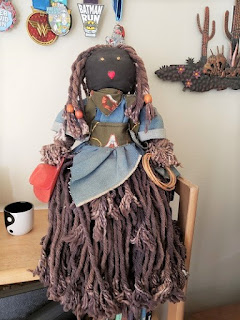 Posted by BootsandBraids at 8:26 PM