No Way to Treat a Lady

Having put off doing laundry, for more weeks than I should have, running low on a daily essential, I had two options.

Option 1 was to just do it — head downstairs to the Laundry Room, and get ‘er done.

Option 2 was to drive to the Mall, purchase more of that essential, so I’d not have to revert to Option 1.

In my unit is a dishwasher I’ve not used, never not once, in the nine years I’ve lived here. I’d much prefer it was an appliance I actually needed, like a washer/dryer, but it is what it is.

So which option did I choose?

That’s right … I drove to the Mall.

I was planning on running by Sprouts anyway, and the Mall is just down the street from Sprouts, so I popped into the boutique, purchased enough of that essential to get me through another week of not doing laundry .

The outside world provided some interesting sights today. 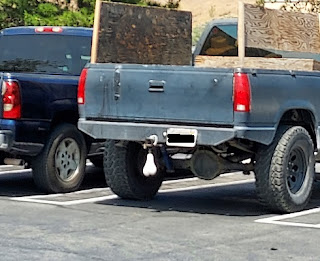 So, is this appendage like when the peacock spreads its tail, like a fan, to attract the female peacock?

If so, I can’t image many females that would be attracted by truck testicles, but you never know.

Next was a truck that had a skeleton dressed like a female in the truck bed — sun hat, hair, dress, jewelry.

The photo isn’t all that clear, but it’s the best I could capture inasmuch as I was driving. Suffice it to say, that's no way to treat a lady. 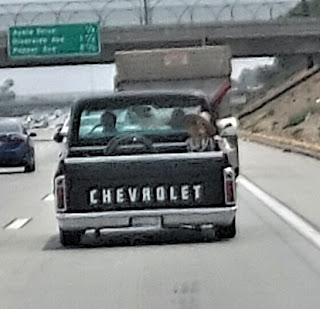 It being way past lunchtime, I detoured by See’s and, in addition to lunch, I was tempted by their 100th Anniversary cup.

I need another coffee cup like I need a hole in the head, not to mention I don’t have room in the cupboard for more cups, but it was so cute I couldn’t resist adding it to my collection. 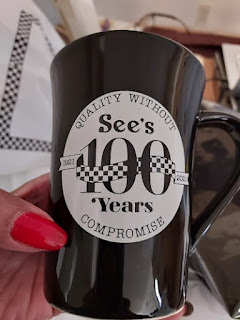 Taking the streets home, I spied a truck that appears to be having an identity crisis. 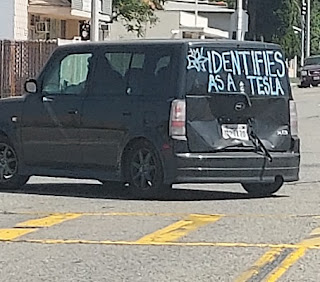 Nearing the end of my foray out into the world, there was a traffic holdup. 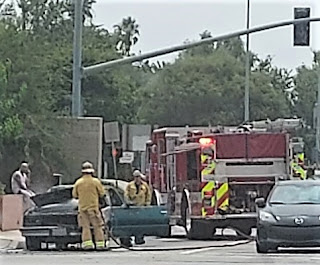 Nearest I could determine, it was a car fire, no other car involved.

Poor guy. There’s no coming back on this one. The insides have been incinerated. 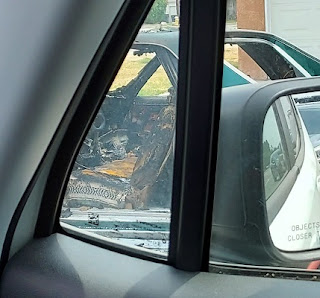 What could cause a car to ignite like that?

Arriving back at the complex, after I hauled the groceries upstairs, I had a sudden urge to get laundry out-of-the-way.

That’s right, after purchasing more essentials — so I wouldn’t have to do laundry, I did laundry.

My essentials drawer runneth over. I don’t even need to remove the tags off the ones I purchased — but I will, and then add them into the rotation so, if I feel like not doing laundry in the future, I'll have backups a plenty.

So, that was my day. Now I’m all settled in, watching the BBQ Brawl marathon on Food Network, and hope I don't get the urge to do anything tomorrow, except rest and needlepoint.

Posted by BootsandBraids at 6:22 PM