Woke up this morning to a much needed surprise … RAIN.

We’d been getting flash flood warnings every hour on the hour for days, with nothing to show a reason for the annoying ear-piercing high-pitched sound. That is, until we finally got today’s rain which, hopefully, will continue for a few because this drought area really needs it, thought I.

It didn’t. By the time I returned from this morning’s workout, it was back to being hot as Hades and outside had dried up.

Also, when I returned, Church Lady, Jan and a resident I don’t know, were standing in the parking area, waiting for Brother to show up with fresh veggies.

Evidently, they’d been waiting a while, decided he wasn’t coming today and were about to head back to their units with Church Lady saying, “Too bad he didn’t show. I was looking forward to an onion sandwich”.

Now, I grew up poor. So poor that a meal in the family was often two slices of bread with sugar in the middle, but I never ever heard of an onion sandwich.

With Jan in my ear, trying to tell me something about rearranging the rocks, I didn’t get to ask Church Lady about that, but later researched online.

Evidently Onion Sandwiches are a thing, and not because one is poor, but because one enjoys "rounds of raw onion tucked between slices of crustless white bread spread with mayonnaise".

Interesting, but bread and onions are on my Avoid List, so I won’t be trying that.

Jan said she’d removed the Dance Rocks and, instead, had planted a challenge having to do with the Seven Dwarfs.

I accepted the challenge, solved it, and am now presenting to you readers as a challenge.

Some of the rocks are a little difficult to read in the sunlight, so I inserted names into the photo.

No cheating. No researching names of the Seven Dwarfs. On the honor system, name the missing dwarf. 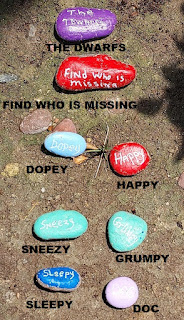 The weekend’s purge didn’t go as well as expected.

I did manage to turn the chaos that was my makeup area into a semblance of order.

And I did get some little work done in the kitchen cabinets.

While doing so, I found a mason jar I’d forgotten I had.


Just in time to be put out for a Halloween display but, in the interim, the brew you see inside is the lime water I’ve been drinking every morning, as suggested by the woman I ran into while leaving the Pain Cave.

At any rate, the purge was going great guns until I decided to tackle a container of spiritual books taking up room in the bedroom closet.

I’ve given up on the idea that anyone in my family would be interested in expanding their minds by reading the books after I’m gone — except maybe granddaughter’s husband. He seems cerebral, but not in the same way as I, so it’s time to let go.

Plan was to research each book for value, keep valuable ones — son-in-law will know what to do with those, donate others.

I’d barely dragged the container from the closet, when I got distracted by an old journal.

The journal chronicled three of the 4 years 1 month I worked with the Witches at the law firm.

Reading back through the hell I lived with those Witches, I had to laugh at some of their antics, for instance this from 10/24/90.

"I caught bloody hell all day from Henrietta following me and watching me and going through stuff on my desk when I stepped away and giving me dirty looks because, although I was getting Henrietta’s work out without any problem whatsoever, I was in Henrietta’s mind doing too much for Joyce. I ignored the nonsense as best I could. I just pushed and got everything done but, in order to do that, I had to ignore both of them hovering and interrupting and Henrietta competing for the lion’s share of attention".

"Henrietta really resents the fact that I have another attorney. Henrietta is so class conscious that I think it’s a status thing with her. Henrietta is acutely conscious of the fact that she is THE senior attorney and believes that entitles her to instant immediate service. Henrietta is not team oriented. It irks Henrietta to no end when I do work for other people, including and most especially Joyce and Jane. That one time when Joyce was keeping me too busy to suit Henrietta, Henrietta suddenly got busy and found a document she wanted me to do. Henrietta RAN it out to my desk and sort of stood there like ‘stop working on Joyce’s document and do this for me now.’ When I didn’t let Henrietta disrupt the work flow, Henrietta moved from standing in front of me and got behind me. Henrietta pretended to be getting something from the file, but I could see out of the corner of my eye that Henrietta’s hands were on the drawer, but she was reading my screen. Henrietta continued to stand behind me for a bit in an attempt to intimidate. When I did not react by appearing unnerved, Henrietta let out a heavy sigh and said in a hurt childlike voice, ‘I think you like Joyce better than me’. Pathetic, isn’t it."

Truth be known, I didn’t like any of them — not Henrietta, not Joyce, not Jane, but the pay was good, and I had my twins to raise. Turns out no one else liked the Witches either because, once I reached the point of being done with them, applied for and got a transfer, the Witches could not hold onto a secretary thereafter. My replacements, who were put through nowhere near the hell I was, lasted a few months, transferred back to the department they came from and/or quit the firm altogether.

Needless to say, I’m not going to make much progress on that container of books until I finish reminiscing through this journal.

I might entertain you with further weird, wacky excerpts about these grown-up women, attorneys no less who, looking back, had to be functionally insane.

Posted by BootsandBraids at 3:16 PM