Fourth of July weekend and nothing happening around here.

Nothing happened on Thursday either.

After all the preparation I did for that day’s water shutoff — to repair “two broken main lines”, the water was never turned off.

I don’t think the plumbers ever showed up because, with the point of the break being just around the other side of my building, where I would have heard sounds or felt the vibration of motorized tools, I never heard any sounds to indicate plumbing equipment, nor did I feel said vibrations.

Outside only once that day, just long enough to take out the trash, check the mailbox, I never saw any of the maintenance guys OR a plumber’s truck and, whenever I was in the kitchen — which was a lot because I had the munchies, I’d check to see if water was still on.

There was no sputtering at any time during the day to indicate water had been off, even for a short time, that I might have missed.

So, who knows what screw up management has wroth upon us this time, but the good news is I had plenty of cold filtered water to quench my thirst that day and the next, plus I didn’t have to cook.

Upon returning from the Pain Cave yesterday, I made a point to take the long way around, in order to walk by the area where I’d previously seen water leaking from the broken main lines. 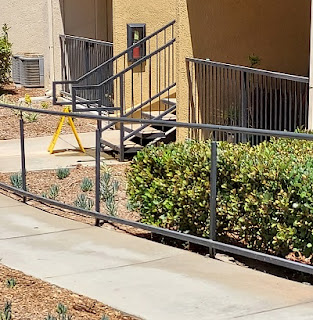 Though it’s difficult to discern in the photo, the dark shadow is wet with running water leaking up from the concrete.

Too bad that water can’t be diverted to the grassy knoll, and other areas that could use it. The drought is having a severe effect on grass around here — everything is turning brown.

At any rate, management doesn’t seem to be worried about the situation because, attached to our doors yesterday, instead of a notice indicating why water was not turned off and when it will be, was the monthly calendar indicating management is off on a three-day weekend.

I swear, if it wasn’t for the cheap rent, the Pain Cave and everything else I need so close by, also the perfect placement of my unit to see pretty much everything and everyone, I’d blow this joint. 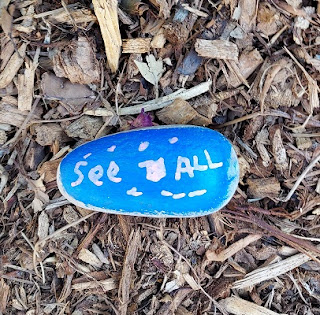 On another note, there’s been a complete reversal on my decision to live with that ghost in the machine — the ghost that causes the microwave to operate in the off position when the door is opened.

I unplugged the machine and, deciding it an opportunity to get more counter space, I did my research and have ordered a compact microwave.

The one I’ve ordered is kinda weird looking — more like a TV than a microwave, but had great reviews, doesn’t take up much space and weighs only 5 pounds, with still plenty of room inside for my needs. 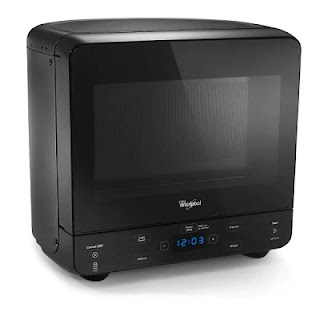 It doesn’t arrive for pickup until the end of August, which means I’m now warming up coffee on the stove, in my old stainless-steel pot, rather than nuking.

As for why such a long waiting period ….. I’m guessing they either have to build it or it’s an import or both.

Either way, I’m crossing my fingers it lives up to the hype and doesn’t leak radiation.

So, with nothing fun or interesting going on, if anyone is looking for me, I’ll be right here — all weekend long, inside, catching up on recorded television programs, and working on the needlepoint canvas I began in February.

Have a Safe and Sane Holiday.

Posted by BootsandBraids at 7:19 AM

Email ThisBlogThis!Share to TwitterShare to FacebookShare to Pinterest
Labels: 4th of July, Complex Management, Drought, In the Kitchen, Outage