Seeing the latest count at only 570 people thus far charged in connection with the January 6 riot is disappointing to say the least, but it’s better than nothing AND, insofar as I know, the hunt is ongoing.

Actually, with today’s news of the arrest of an off-duty DEA Agent, that brings the total to 571.

Also disappointing is that it’s been radio silence as to whether Walmart Karen and Victoria Secret Karen will be held accountable for their actions. With no word as to charges or lawsuits, it’s looking like they’ve both gotten very lucky and public humiliation — their names, faces and videos forever in cyberspace is the only consequence of their actions.

Also, no word as to who moved into Sue’s upstairs across the quad corner unit.

It’s been five weeks and I’ve not seen hide nor hair of our new neighbor. The patio chairs moved locations several time, but it must be telekinesis as I’ve never seen a human being moving them. 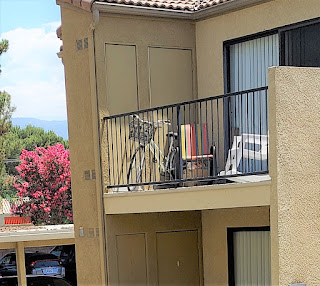 The bike on the patio is telling me the resident has not been seen because of a disability, so I dunno. Perhaps he or she is self-isolating until the Pandemic is truly actually over OR the new resident is a vampire, only comes out at night.

From the crowd surrounding Brother’s van, word on the complex has spread. Even Handsome Man, who lives back side of the complex, was there.

The Talker calls or texts me to let me know Brother is on his way, but I can’t imagine she’s calling all the others who showed up. Maybe it’s like that old “telephone” game we used to play as kids, where the person called calls the next person, and that person calls the next and so on down the line.

Then there were people who just happened to have been driving through the gate. They slowed down to see what the crowd was about and were invited, by Talker, to stop and help themselves to vegetables — even the driver of a water delivery truck, which I thought sweet and hilarious.

Having passed on tomatoes from the market, because they were too soft, the only thing I needed were tomatoes. Brother had plenty, but they were the same as those at the market — soft, so I went back upstairs to get ready to head to the Pain Cave; that is, after taking a photo of Assistant Manager’s husband, walking away with a full bags of veggies, and a watermelon, just in case Complex Manager decides to make a fuss about the mobile food bank doing something positive for residents. 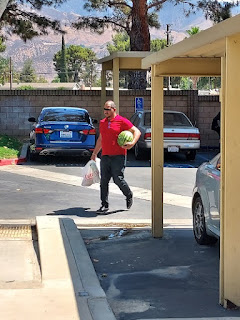 If Manager does, I can throw it in his face that a family member of his staff is part of the crowd taking advantage of the free offerings.

The van was still there, when I left for that morning’s workout, and Assistant Manager’s husband was back for more — probably another watermelon. This one for his neighbors, Head Maintenance Guy’s family.

Brother had a ton of watermelons but, of course, I can no longer eat watermelon.

It’s so annoying that the healthy foods I used to eat, that helped me keep my weight down, are on the can-no-longer-eat list. No longer can I have simple things, like an apple, or avocado, broccoli, brussel sprouts, zucchini — without becoming deathly ill, but I can eat greasy potato chips with homemade tomato salsa.

Posted by BootsandBraids at 3:10 PM