Heading down the walkway today, on my way to the mall to exchange a jacket for a smaller size, I saw that Jan had added to her painted rock dance. 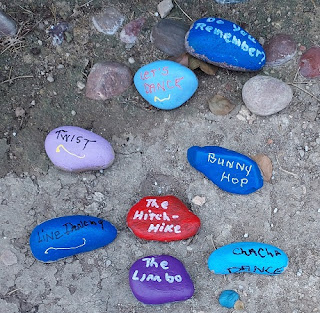 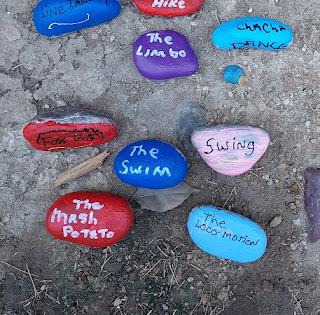 Returning to the complex, I found a notice posted to the door indicating management was going to give another go at turning off the water — tomorrow, 8:00 to 4:30.

I’ll be up at 6:00, to make sure I can shower, make coffee, wash the breakfast dishes. Then we’ll see if the second time’s the charm.

As for Jan’s new “Do You Remember” layout, I’ve no problem remembering the Swim, Limbo. As for the Mashed Potato, I remember, as a teen, having to lean on a chair until I could get my feet to move simultaneously, in different directions, but I learned it well because, when we had a dance party in the Community Room three years ago, and the Mashed Potato song came on, I was up doing it. My feet knew just what to do.

The Hitch Hike, was a little nerdy, so I don’t remember that being done at any of the parties I went to back in the day.

Jan's Locomotion rock has that darn "everybody's doing it" song stuck in my head.

Not on Jan’s list are the Watsui, Jerk, Hully Gully, three other favorites of mine that, if called upon, I think my body would remember the moves. Also, not on the list are Stroll, Pony.

Looking on youtube at the dances mentioned, it occurs to me that dancing in our day was much simpler, easier to learn the steps, way easier to move the body then, and now, because it’s mostly wiggling this that the other — and we can all still manage to at least wiggle some of this that the other. LOL.


Mentioned in the video are the Hand Jive and Madison.

I thought the Hand Jive ridiculous, never did it, and never heard of the Madison.

Now days, dancing is so precise, so many steps, not to mention so fast ….. so very fast, warp speed.

I’ve been trying to learn some of the TikTok dances, but the intricacy is beyond my ability, not to mention the movements so fast that I get lost, except for one — which is more a Challenge than a Dance.

Moving to a specific song entitled Touch Down Cause Hell, created for the challenge, you slowly walk into frame, back to camera, and walk away.

I can’t get enough of seeing others, sometimes groups of others, in differing locals, different occupations — there's even a funny video of a bus driver doing the challenge, slowly walking into frame, back to camera, and then walking away — usually shaking their butts.

I don’t have much room in my unit, not to mention the right equipment to record a TikTok video, so this example, snapped on my cell phone  — showing off the new jacket, is the best I can do … minus the butt shake, cause I ain’t doing that.


So there you have it … my first quasi TikTok video — for your eyes only, not posting to TikTok, LOL.

Posted by BootsandBraids at 3:26 PM