Guardian of the Rock Garden, Episode 2

Trainer had personal business to take care of today, so this morning’s workout was rescheduled to tomorrow.

That means I’ll be going “Beast Mode” remainder of the week — back to back sessions, with no recovery time in between.

It was a good morning not to be off heading to the Pain Cave, because hearing sounds of the Landscapers, I was able to don my Guardian of the Rock Garden disguise and devote the morning to keeping an eye on the guys.

I got worried when I saw a landscaper being careful to step over rocks to clip the hedges.

Rocks appear to be scarce elsewhere, while my rock garden is still pretty much intact. However, seeing how the painted rocks could be a hazard, interfere with landscapers when they have to step over to get to hedges in the back, possibly even cause one to lose his balance and be injured, that was a big OH OH moment for me.

I started thinking today was the day they’d be taken away, because I didn’t see how the landscapers could clear out the hedge clippings — now spread out, over, in-between the rocks, without removing the rocks.

If that was to be the case, I stayed at the ready so I could run down with a bag, rescue the rocks for relocation.

In the midst of my Guardian duties, the friendly chatty neighbor from the next building over knocked on the door to tell me Brother was here and had some very fresh looking veggies.

Evidently, Brother now has a schedule — Monday, Wednesday, Friday, same as my normal workout days so, depending on his timing, I won't always catch the van.

I’d received no text message or call from Talker, thanked neighbor profusely for going out-of-her-way to alert me and, still in need of tomatoes, headed down.

On the way to the van, where I learned Talker had not called because she was not here — had a doctor’s appointment, I saw the landscapers’ plan for removing the clippings. 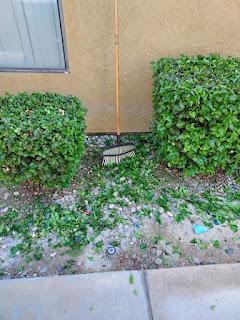 I was now even more certain, there’d be no raking the clippings out without removing the rocks.

The tomatoes Brother was offering were just how I like them — firm. The peppers looked nice as well. 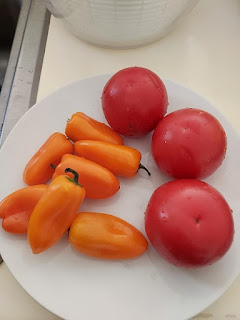 Brother educated me that the peppers, which I thought were ghost peppers, but which Brother said were not — I forgot what he called them, were not hot and spicy like the serranoes I’m fond of. He says they’re sweet, and proved it by eating a whole pepper right there in front of me.

I prefer peppers that are hot/spicy when I make salsa, which is what I plan to do with the tomatoes — make salsa, but I also add stevia for salsa that is hot/spicy/sweet, so I’m anxious to see how these peppers work out as a substitute for stevia.

I should have taken more tomatoes, no idea why I did not, except that’s how I do my grocery shopping. I don’t stockpile too much, choosing instead to shop for only a day or two or three ahead.

Word of the van continues to spread, as The Baker walked over from her side of the complex and, just as I was leaving, Greedy Grabby showed up.

She was carrying only one bag to fill up, rather than a cart to raid the van, and her entourage was not with her.

Greedy Grabby looked sad and lonely, even seemed hesitant to greet me as though she wasn’t sure I’d greet her back, but she did — greet me that is, and I returned the greeting.

I haven’t seen members of her entourage in ages. I don’t think they live here any longer.

It is now late in the day, and I can remove my Guardian disguise and get comfortable, because the landscapers managed to rake around and through the rock garden, without complaining, or cursing, or hurting themselves, or removing any of the rocks.

Posted by BootsandBraids at 3:17 PM