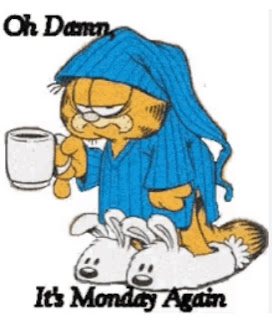 After a week of freedom, it is now back to the regular grind of things I must do, places I must go. Not to mention this Friday is Bingo where I have to get to mingle with the seniors, catch up on what’s been happening around here.

It may be coincidence, but twice over the weekend, I saw Assistant Manager walk through my walkway on the way to her car.

Inasmuch as she usually takes the walkway behind my building, which walkway is smack dab at the bottom of the stairs by her unit and she is now walking all the way around to go through my walkway, I’m thinking it may not be coincidence, that instead she’s somehow gotten wind of the ghost tenants living in the unit beneath Next Door Neighbor and is trying to see what she can see.

Timing was on the side of the ghost tenants, because it was a short time after Assistant Manager's sweep of the area that I saw the boy child taking trash to the dumpster.

That’s really pushing the envelope to send the kid out in daylight. They’d be better served to wait until cover of darkness when he’s less likely to be seen ─ not just by her, but by anyone.

I’m surprised their van hasn’t been towed because not only is it parked backwards ─ which is against management's parking rule, but it has no visitor sticker on the dash, which sticker is only good for visiting three days.

As for the regular tenant of that unit, I haven’t seen her since the ghosts moved in and her car hasn’t moved since either.

Is she in the hospital? … On an extended vacation? … or are they squatters who have done away with her, taken over her unit?

My inquiring mind wants to know but is opting to keep quiet and observe in order to claim plausible deniability if and when the inevitable manure hits the fan.

I returned from Long Beach with quite a few photos to send out for development, add to the Creative Memory Scrapbook. One such photo in the bunch was of me at Twin 1’s new place, planting my butt in her father’s Infamous Chair. Something I do every time I see the chair to taunt him, make him roll over with rage in his grave. 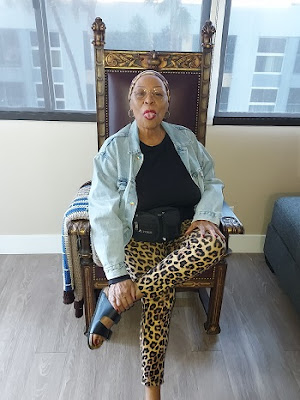 Speaking of being back, on last night's episode of Best of Holiday Baking Championship Gingerbread Showdown, I caught a glimpse of someone who pretty much universally got on everyone's nerves last year when she hosted a competition. 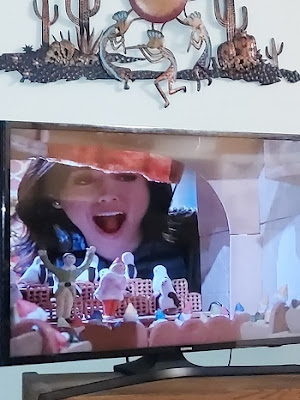 She's darkened her hair to make herself look more mature, but it's definitely Molly Yeh, back again as a host or judge. I don't yet know which because I set the show to tape for later viewing and went to bed.

However, before I turned off the television, I saw something that way outdid having previously blogged about seeing a competitor with hair hanging over her cookies' icing blow her DNA all over the icing in an effort to dry it faster. Last night's competitor actually sneezed over his gingerbread showpiece.

Didn't turn his head away to the side.

Didn't put his elbow up to block the sneeze from spreading.

Just threw his head back and then forward to sneeze directly over the gingerbread showpiece he was building.

Thankfully, I didn't see the judges eat the showpiece.

Hopefully, no one ate it later.

Posted by BootsandBraids at 6:00 AM