Woman with the Red Chair

Known the first few years around here as "The Walking Lady" because I was doing laps around the complex, and last few years as "Lady with the Red Chair on her patio" (laps are now done on the college campus) residents accustomed to seeing the chair, as they stroll by, are going to think I moved.

The pieces are ready to be taken down to the dumpster when I return from this morning’s workout.

Rather than carrying the pieces down in bulk, wrapped in bags, I’ll have to transport them down carefully, piece by piece, in order not to impale myself on the broken vampire-killing stake like areas like these … 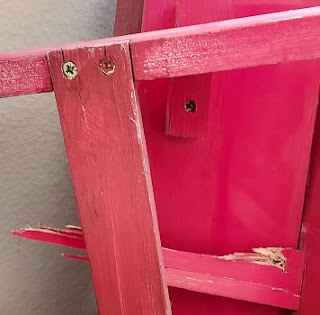 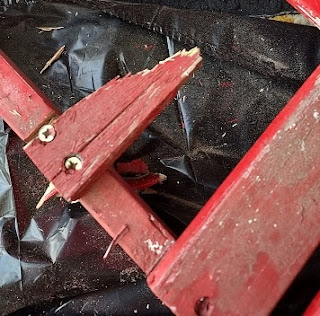 Next on the agenda is to prepare for tomorrow’s fasting blood test.

Shouldn’t be too difficult, as I don’t eat anything after 7 p.m. anyway and, as my appointment is 9 a.m., it shouldn’t be too rough to hold off on breakfast until after that time.

When I had that in-person session with the doctor last week, she mentioned a bone density test, which I declined saying "I don’t need it".

I strength train. My bones are fine.

Nevertheless, I got a call a few days ago — "Your doctor has authorized a bone density test" and after asking if I was in a wheelchair or had a hip replacement and other age-related questions I don't recall, an appointment was scheduled for next week.

It would have been a waste of my time and energy, but I let it go. THEN, after thinking about it, I got mad.

My thinking is that inasmuch as I only go the medical route when it’s something I can’t solve on my own through holistic measures, don’t bother the doctor for every little thing — even go outside of plan for eyewear because their Optometry does such a poor job that, when I do seek medical attention, it means I really need it and should get it.

That not only did not happen with the doctors I ran through with the rash situation, but I’ve yet to hear from dermatology.

I went in for a rash, ended up getting a Shingles shot and now scheduled for a bone density test — things I’m sure they are billing Medicare handsomely for, but no help with the one thing for which I sought help.

I called yesterday and cancelled the bone density test.

While still angry, though I no longer need dermatology (turns out the rash was an allergic reaction to brown rice flour), I called Member Services to vent.

They’ve sourced with an outside dermatology institute.

Dermatology used to be part of the medical center’s operation.

Getting the name of that outsourced institute, I went so far as to call.

No one answers the phone there.

Looking up Yahoo reviews, I learned the institute did me a favor by not following up on what the doctor ordered.

Their reviews are along the lines of "Horrible Service!!" ... "Calls are outsourced to a call center".

I didn’t get a call center. I got no answer.

"Office staff is rude and inefficient!" ... "Go to a different Doctor!!" ... "I would not recommend this office" ... "My experience with this dermatology doctor is very bad. If I had to give negative or 0 I would definitely give him zero".

Sounds like just another nightmare I don’t need to put myself through. So, if they ever call or send me an appointment card — which I doubt, it’s a big fat no thanks.

I’ve been with this HMO since my early 20’s. They've made some mistakes — like for decades diagnosing my food allergies as an ulcer, prescribing valium, et. al., and like killing my youngest brother's wife, but at least there was service.

As for HOW they killed my youngest brother's wife ... she regularly got mammograms but ending up dying from undetected breast cancer.

I guess they perform the tests but are not good at reading them.

They tried to kill Twin 2 as well. Poo poo'd her symptoms, prescribed medication rather than figure out the problem until I read her symptoms of fibroid tumors in a magazine and urged her to tell them what I suspected, insist on specific treatment, which she did and eventually got.

Now that there are not only mistakes, failure to diagnose correctly, but no service at all, I'm going to ask around to see if things are like this all over or if there is a better, more reliable, more responsible medical provider.

I did get a survey asking me to rate the doctor that looked at the rash, said "I don’t know what that is" and though disappointed in her lack of medical knowledge and giving me that shingles shot, which I now have to get a second dose and shingles shots every year, I don’t want to give her a bad review.

Being as how she’s a Black woman, her journey through medical school and being hired on by the HMO can’t have been easy.

I can’t give her a good rating. I won’t mess with a Black female doctor's career by giving a bad review, so I’ll not respond to the survey.

If it turns out she’s a lousy doctor, it will catch up with her but, from the lousy service I’ve gotten recently, seems she fits into the program just fine.

Posted by BootsandBraids at 10:49 AM