When You Snooze You Loose

Not able to get that animated haunted tree off my mind, I went online yesterday to order. Lo and behold, this early in the Halloween season, it’s sold out already and is not available anywhere.

There are lookalike inflatables available, but I don’t do inflatables.

I usually do cute stuff for Halloween. However, thinking I’d be a vampire if we have a party and wanting a haunted tree on the patio, got me to thinking why?

Why have I gone dark?

Looking at the continuing police brutality against POC, the unrelenting determination of the Alt Right and stupid No. 45’s supporters, I think it’s my feeling of hopelessness coming out as vampires and haunted trees, rather than the usual candy corn.

So, anyway, after thinking about the unavailability of that rather large tree, it occurred to me it was probably for the best because the outdoor storage area already looks like a prop shop. There’s no space for that particular tree.

I decided on a smaller more manageable version. 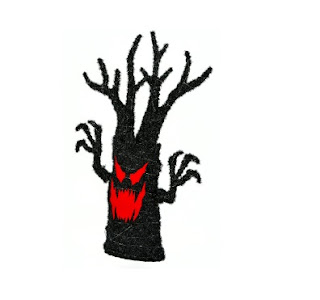 On tap for today is dismantling the red Adirondack chair.

It’s so rickety weather worn that I can probably smash it to pieces by sitting on it or tossing it off the balcony. I’ll instead take the safe route of dismantling with the electric screwdriver.

I wasn’t going to blog about an interaction between Red Light and I that occurred Saturday before last because, though puzzling, I didn’t think it important and because — in what would probably surprise her, I didn’t think Red Light was important, worth a second thought. A vete a la verga, if you will (Thanks Bob for that awesome new curse word).

Reading on Dawn’s blog this morning that today is her birthday (Happy Birthday Dawn) brought the interaction back to the forefront of my mind, segued into adding to today’s post.

Insofar as my neighbors, except for the crazies — whom I avoid altogether, I walk the middle path by maintaining friendly relationships, careful to not get too close.

That works out well as it keeps me an observer of the drama, never in it and, being an independent party, people like to think I'm clueless as to what’s going on and can’t wait to spill the tea all over me.

I, of course, play it up like shock, awe, it’s the first time I’m hearing the tea, use it for blog fodder.

So anyway, I know Red Light has had several disputes — is disliked by her upstairs neighbor (there have been complaints to the office about Red Light and vice versa), disliked by her own next-door neighbor the Smoker, and recently my Next-Door Neighbor told me about telling Red Light, "Lose my number Don’t call me again!"

I guess Red Light was getting bored when, Saturday before last, she turned her attention towards me with the text — "When is your birthday?"

Back in March, when Red Light invited me to lunch with herself and the Talker, sensing she was trying to get too close even then, I declined — using my food issues as an excuse. In all honesty though, I said no because my spidey sense told me to not trust her knowing too much about me. She’s okay as a neighbor and gives good blog fodder, but she’s just not the kind of person I’d have as a friend.

From the way people around her are dropping away, I guess I got it right.

She’s a bit of a troubled soul, has gotten into EVERYBODY'S business. Even tried to turn me against Painted Rock lady, which didn't get anywhere because PRL hasn't done anything to offend me personally.

Red Light even recently called Corporate and made a complaint about Activity Director being incompetent and rude to the seniors.

She isn’t wrong, but why reach out that far about something that’s been going on for years before you came on board, hasn’t impacted you personally but you decided to make an issue?

Long time readers of the blog know I don’t celebrate my birthday.

Birthdays in the family were celebrated when I was coming up, but so rarely that I learned not to expect or want so as to not feel hurt; but even if I did celebrate my birthday, I’d not be comfortable with giving Red Light my exact date. No telling what she could do with that data.

My reply to "When is your birthday" was "Thanks for asking, but I don’t celebrate my birthday for personal reasons".

"Sorry I asked" was her snippy response.

I mentally called her a bad word — the "B" word, went on with my day.

Expecting she might still be mad and a little standoffish days later at bingo, seeing she was not, I attributed it to a moment of frustration about not being able to penetrate the shell I’ve placed around myself.

Oh well. But best not to try me further because you're bored and curious.

Posted by BootsandBraids at 1:28 PM