I got a hardy har har out of this meme when I saw it on facebook. 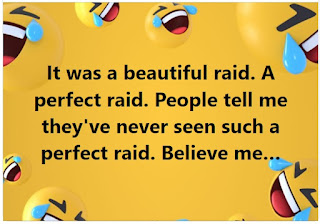 It's fun to watch the chickens come home to roost. However, truth be known ... I don't have much faith that anything of substance will come from any of it ─ the hearings, the raid insofar as bringing him to justice. I think it's all water off a duck's back and he will go on doing what he and his colleagues do until they destroy us all.

So, anyway, that not so cheery beginning being said, plan for today was to get up early, head to the medical center for a fasting blood test. Then, yesterday afternoon, before I needlessly starved myself this morning, came the text message to schedule an appointment.

Because of the pandemic, the subsequent viruses and now monkeypox, nothing anywhere is as it was before.

Walking into the medical center on Tuesday for my appointment was a shock, a reality check.

I’ve never in my life seen so many sick people in Urgent Care (UC).

The path to my GP was through UC and it was a mosh pit. People everywhere — filling all the seating areas, lined up against the walls, in the hallways, just everywhere and all looked miserable.

There was a huge board on the wall with the names of UC people waiting to be seen, and it appeared the wait was 2 hours as there was a timer next to each name and it was counting down 1:59 for one name, 1:58, 1:57 and there were numerous names clocking down simultaneously. Which I didn’t think 2 hours was bad considering the number of people waiting. But then again, in order to service as many folks as I saw, there had to have been multiple doctors/nurses rushing 'em in, rushing ‘em out, on to the next.

It was an organized mosh pit AND why is everyone so sick? What’s sending so many to UC?

At any rate, because I had an appointment, the nurse called my name before I even had a chance to settle down, pull out my book to while away the time and, once the doctor came in, she didn’t seem in a hurry to get me out and on to the next.

It took three months to get the appointment, and now it was a leisurely visit — with mostly her asking me how I’ve been since we haven’t seen each other in-person since July 2019 for guess what … according to her chart "skin rash or hives".

Interesting. I’d forgotten I’ve been through this before. Whatever she gave me then must have worked. Probably because I got to see her right away and it was handled.

The wait was too long this time, so she sent a referral to derm, which may no longer be necessary because, after eliminating brown rice flour, red bell peppers and cherry tomatoes from my eating plan, which research indicated some people are alergic to — break out in hives, things appear slowly but surely improving, going back to normal.

By the time I hear from Dermatology, I expect I won't need 'em.

So, anyway, that taken care of, the doc seeming not to be in a rush got to talking about the economy, the state of the world.

She has a theory as to why so much is going wrong … "too many people". Over population, insufficient space. Land and foliage replaced with buildings and people.

Maybe, but I’m sticking with the Gods are angry and it’s the Plagues of Egypt until we get our acts together.

At any rate, after seeing the mosh pit at UC, and receiving that text to schedule an appointment, I gave up thinking I could just walk into the Lab today, take a ticket, get a blood test and be out — like before. The appointment I’ve scheduled isn’t for two weeks because the early morning times were already taken for today, tomorrow and the next day and the next, so on and so forth. I picked a day that I figured I wouldn’t die if I didn’t have breakfast until after 9 a.m, and I chose to keep that appointment at a smaller outlying clinic, rather than the main medical center because of the crowds and trouble finding a parking spot.

No sign of Black Bikini yesterday. Maybe the excessive heat kept her inside but late yesterday evening, I did see the Smoker — my across-the-quad downstairs unit neighbor, for the first time since February of 2020, just before the shutdown hit.

There was a patio inspection yesterday and, evidently, she got talked to about the deplorable condition of her patio because, as I was locking up for the night — closing the blinds, locking the patio sliding glass door, setting up the burglar bar, I saw her out sweeping her patio, picking up the trash that she’s allowed to lay there for the last two years six months.

She had a helper; someone I couldn’t recognize. So maybe she told management she couldn’t handle the cleanup, so they got her help.

No wonder our Karen character has been silent lately. The new manager, No. 10, is kicking butt, taking names and Karen must be working hard to stay out of the line of fire.