Arriving at the spa this morning, I saw the big Super Sears store in the shopping center has gone out of business. Possibly, one of the retailers that fell victim to the Pandemic.


Looking at the workers on the roof, and on the ground, I couldn’t determine whether the building is being revamped to house another facility or being torn down.

At any rate, things went well at the spa. The pedicurist did a dynamite job on returning my feet to normal, gave me the polish I requested, as did the manicurist.

At first, the manicurist tried to pressure me for gel and, when I said no because it’s too difficult to remove. She said "No, it’s easy".

"Easy for you because you use grinding tools" (which I don’t think can be good for the nails, not to mention gel can't be removed at home by me). So no to gel.

Instead, since I couldn’t decide on a color, I asked "Can you do French?"

So, I kicked it old school with a French — on both nails and toes. 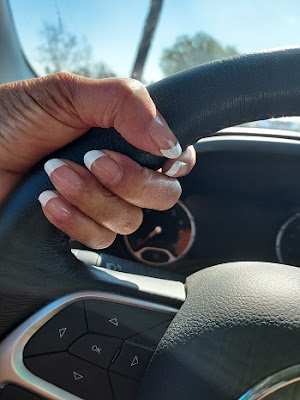 Everyone in the salon was masked — clients and employees alike, so I’m fairly certain I walked out of there with nothing but what I asked for.

My only complaint would be the signage on the outside. 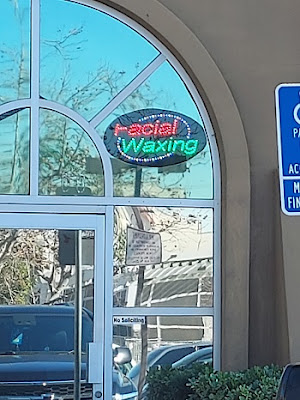 It gave me pause, because I couldn’t figure out what "racial Waxing" was or could possibly be.

Was it the old Michael Jackson thing of making dark skin light?

It took me a second to figure out the bulbs had burned out, turning what was probably an "F" into an “r”. What should have shown as "Facial Waxing" now reads "racial Waxing".

I didn’t point it out to staff. I’ll let someone else police that issue.

Will be interesting to see if that signage is still there when I next go in, which I’m not going to risk going back to regular manicure/pedicures, even though I felt safe in the spa. Until the Pandemic is over, appointments will only be for medicinal purposes — for when my feet need attention.

Another interesting sight was the signage on a spa for guys. 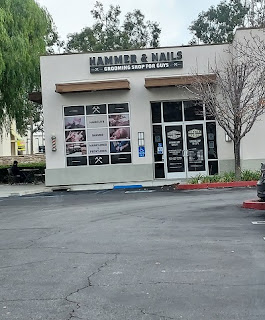 Cute name, but it too looks to be a victim of the Pandemic — now abandoned.

Posted by BootsandBraids at 4:19 PM