So evidently, because I’d long ago ordered a birthday gift for my buddy Apache off Thing 45’s site, because Apache is a fan, I’m still on the insider’s mailing list.

The latest is this offer to get my name displayed at the rally in progress. 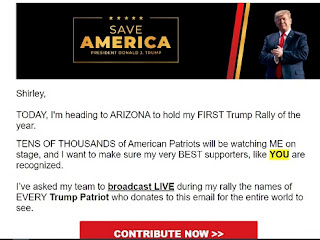 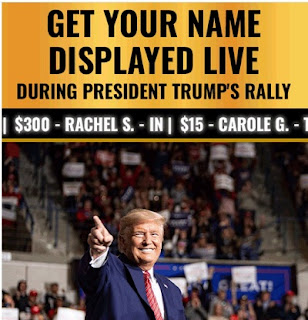 The level of determination it’s taking this guy to prove he’s right, in the face of overwhelming evidence to the contrary, must be mentally exhausting.

I don’t know about you, but I’m dreading the thought of another Presidential Election. Can’t even get away from all the hoopla over the last.

At any rate, there’s that.

Thus far, it’s been relatively quiet this weekend. The only outside activity was to drop off a laptop for repairs yesterday.

Seeing a group of residents, appearing to be in heated conversations when I returned, I walked over asked, "What’s going on?"

They were angry, said "We should all complain", because Head Maintenance Guy had failed to unlock the security doors over the mail center, causing the mail carrier to turn around, drive off, without leaving mail.

The security door, reinforced with all kinds of added metal plates, that are unlocked by staff, just long enough for mail to be dropped off and picked up by residents, then relocked late afternoon, is the only thing that's been working to stop the many break-ins we'd experienced.

Not the end of the world in my book to miss a mail delivery, but one resident was actually standing in front of the security door, holding on, looking in at nothing, seeming to will it to be unlocked with mail in the mailboxes.

I should have taken a photo of that.

For one resident, a woman in a wheelchair, not receiving mail did sound serious because she said she was expecting medication that had to be taken THAT day.

With Monday being a holiday — no mail, no office open, she can’t get her medication until Tuesday.

If what she says is true and not just puffing, I hope she makes it.

It was a “Charge not detected” message that sent the laptop in for service, after an over two-month odyssey with me trying to solve the problem by purchasing new chargers, returning because they did not fit, electronic tape to try to salvage the malfunctioning charger — again to no avail.

After a tech guy indicated it was probably the battery … "Buy a new one, come in for service, ask for me — the tall handsome guy", I ordered a new battery and, scheduled service to install once it arrived.

Dropping off on Saturday, the Tech Guy was a Tech Girl who asked, "Did someone here tell you it was a battery problem".

"Yes. I didn’t get his name, but he said he was 'Tall and Handsome’. Do you know who that is?"

That not only brought a smile to her face, but a hearty LOL, as she replied "no".

Glancing around, I didn’t see anyone to fit that description.

According to email, the install has been completed already and, supposedly, the laptop is back in business. However, I’ve no plans to drive out of the area, pick it up until Tuesday — after which I’ll learn whether it’s really repaired or not.

As for residents complaining, there are a few here who have standing, will call Corporate and regulatory agencies in a heartbeat. They are not afraid and can't be intimidated, so there will be a few complaints and then nothing, because what's to do, except tell Head Maintenance Guy to not forget in future.

It just now occurred to me why some stand up, some keep quiet, and that's because the complainers are old timers who have options. The others are those who come in through a program — so poor, or so sick, feel so lucky to have a roof over their heads, to have gotten a unit here that they will put up with anything.

Posted by BootsandBraids at 8:51 AM