Awwww … He’s Asking About Me

After receiving information about Thing 45’s Rally in Arizona, I set communications from his minions to spam only to learn I’d already done so, some time ago. There were literally hundreds of communications in the spam folder, but evidently some still squeeze through to the main page. Like the one I’d blogged about last week, re the Arizona Rally, and now this.

I hope he's not too traumatized when he calls them again only to find I didn't respond, there's no update. LOL. 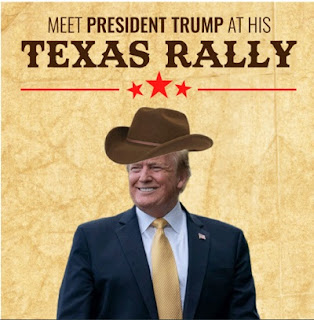 Did you ever see anything as ridiculous as this Texas sized hat photoshopped onto his head. I’m surprised a big old belt buckle and boots weren’t superimposed.

Even though I cleared out the spam folder last week, as of this morning, there are an additional 72 emails from these people.

If I were a supporter, receiving dozens of emails on a daily basis, it would turn me off.

Looking at what’s now in spam, it appears the Rally after Texas is in Florida. I wonder what kind of outfit will be superimposed onto him for that one.

I’m taking a big risk tomorrow with an appointment at the spa for a manicure/pedicure.

It’s not vanity prompting me to take the risk, as I’ve been perfectly fine with doing my own nails and toes. The appointment is more out of necessity, medicinal even, because I’m having a big problem with painful calluses forming on the bottom of my feet.

I’ve tried to manage it with a pumice stone, cider vinegar soaks, various ointments and Dr. Scholl products to no avail. So, I’m going to have to raise my threat level and let the spa give the feet a little TLC with their magic soaks, oils, scrapping tools.

Hope I come away with the feet feeling back to normal and pick up nothing else.

Posted by BootsandBraids at 1:06 PM