I Ain’t One to Gossip but …

Back in the day there was a TV show called In Living Color.

Jennifer Lopez, Jim Carrey, among others, got their start on that show, and a favorite character of mine was Miss Bonita. 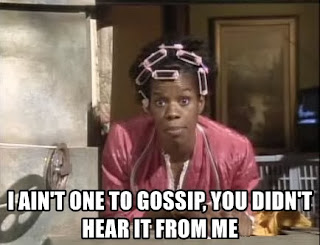 Miss Bonita would hang out her window, or sit on her stoop, greet passersby, then share the tea on that person, prefacing her statement to us — the audience with "Now, I ain't the one to gossip so you didn't hear this from me".

Yesterday was that kind of day.

Needing not one single thing from the market, after hearing about supply chain shortages, I popped in any way to load up on just-in-case essentials.

There appeared to be plenty of what I normally purchase. The only empty shelves I observed were in isles my gut won’t let me eat from — the ramen noodle and frozen breakfast sections.

At any rate, walking out with enough supplies that I won’t have to grocery shop for a month, I saw three people approaching the market dressed in cop uniforms, more specifically Probation — according to the markings on their uniforms.

The market’s security guard was walking behind me and greeted the three with "Hey guys". They returned the greeting and went inside the market.

Probation did not appear to be there shopping for groceries.

Out on the lot, the market’s security guard approached another security guard on the lot. Both were grinning at each other, then one began to laugh out loud when the other one said, "Probation, huh. They coming to the job to get us now."

I thought that hilarious, but then thought, wait, stop, what … are some of these security guards on probation?

That would be weird if criminals were hired as security guards, but not beyond the realm of possibilities.

So, anyway, returning to the complex, unloading groceries from the car, who do I hear calling my name but my buddy Apache.

He was here, bold as brass, on the property in management’s face, walking along with D — the assault victim.

He tells me management can’t say or do anything to him if he’s here with a resident so, unless management can come up with something, I’m likely to see Apache around just as much as when he was living here.

So, anyway, Apache rushed over to tell me Probation was on the property, in the back, five cars of ‘em.

Apache didn’t know why they were here, who they were here for, but inasmuch as I’d just seen three of them at the market, there appeared to be some kind of joint operation going on.

Apache and I took a selfie, and we all three began walking towards the back of the property to see who Probation was here for.

Though I’d heard the whole story, not just what D is putting out for sympathy, I asked if she was okay.

"No …. No I’m not", she said then, indicating she needed a hug from me, she came at me with arms outstretched.

I took a step back and yelled "NOOOOOOOOO! Don’t touch me! Omicron!"

D froze, then began a tirade that went "Kill me now Lord. Just shoot me. I don’t want to live any longer. I can’t go anywhere, can’t hug anyone ……" yada yada yada.

The I need sympathy act is working on some as residents are cooking for her, delivering meals, but I didn’t take her pity soliloquy, need for a hug seriously, and she quickly switched to telling me about how the kitten has turned to a "brat" — knocking things over on purpose.

Though we saw the unmarked Probation cars vertically parked in a row, an occupant in each car seemingly staking out the area, we did not see if an officer had already exited, gone into any of the units, so I headed back to what I was doing, while Apache and D continued their walk.

Back attending to groceries, I ran into Casino Lady’s sister who approached me with, "I ain’t one to gossip but …..".

What ensued was a back and forth comparison on what she’d heard, what I knew, ending with "But you didn’t hear it from me". LOL.

At any rate, the topic of Handsome Man’s son doesn’t appear to be dying down. It’s going to be discussed on the grapevine for a long long time.

As for Probation, just as Casino Lady’s sister and I were discussing how it appears the bad people live on the back side of the property, the Probation cars began driving out of the gate — five of ‘em in a line. I could see there were now two officers in the front seat, but we could not see if anyone was being taken away ... but FIVE CARS? Must have been some bad hombre or five bad hombres — a car for each one.

All in all, it’s been quite the week.

Posted by BootsandBraids at 8:05 AM

Email ThisBlogThis!Share to TwitterShare to FacebookShare to Pinterest
Labels: At the Market, Crime, Neighbors

BootsandBraids
Hey! Welcome! My name is Shirley. A 78 times around the sun retiree, I blog about life in an active seniors community and my PokemonGo activities. Why the handle of “BootsandBraids”? Well, that’s because I am a Redneck trapped in a Black woman’s body. Since I was young, while the rest of the family was wearing dashikis and promoting Black Power, I was wearing boots, watching John Wayne, and yodeling along with the Sons of the Pioneer.