Heading to the pain cave this morning, I saw that neighbor across the quad, downstairs corner unit, has added a graveyard to her patio decorations.

She is definitely winning Halloween, LOL.

We are having a Halloween Patio Decoration contest and, yesterday, I saw the Tyrant taking photos of her patio.

That could mean he likes what he saw and she wins, OR he could be pissed her patio is not what he considers “family friendly” and is going to give her a lease violation.

Who can tell with this guy, but I’m opting for she wins, because her display is the essence of Halloween.

With a resident supposedly testing positive for Covid, and being in self-quarantine, it’s still been business as usual on the complex — except for the fact the regulatory agency opted not to send their agents back to make sure management is in compliance with their rules and regulations.

I was so hoping to be selected for inspection, because management has STILL not handled my maintenance requests, so hopefully the regulatory agency will reschedule.

If not, I’m looking at another round of hounding management for months, possibly years, to get things taken care of.

Yesterday was Pizza Tuesday (and for long-time readers ... yes, they still have that, where residents show up to the Community Room, help themselves to a free whole pizza donated by Pizza Hut).

Tuesday was also Arts and Crafts.

Activity Director advised it’s to be the last Arts and Crafts session this year. Something about the budget and management wanting to focus the budget on doing something "for all of us" (meaning all residents of the complex) later in the year.

Sounds like bull crap to me, but not Activity Director’s bull crap. More like crap coming from the Tyrant.

No Arts and Crafts in November, none in December and management using the dollars saved for some bogus event expecting ALL residents will benefit, give a damn, get involved.

The Tyrant is delusional.

Did he learn nothing from his failed Movie Nights?

So anyway, arriving at the Community Room to participate in Arts and Crafts, I found the ladies, once again bunched up at one table. I myself once again played it safe, opted for a table to myself.

The Seer didn’t grace us with her presence this time, so I was able to spread out and keep the table to myself.

For the first time ever, Not Dead Nancy joined us usual suspects, as did a new resident.

So, things were picking up — just in time to be halted, due to the “budget”. 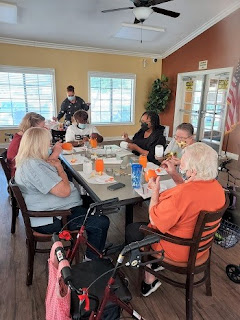 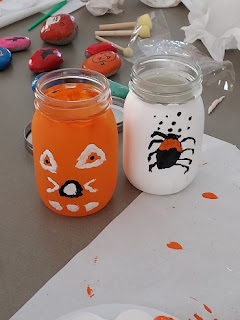 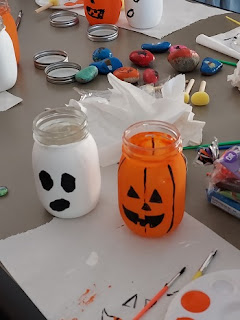 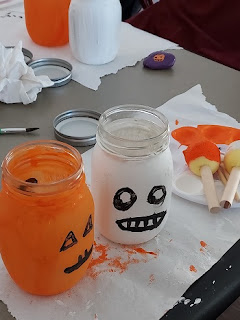 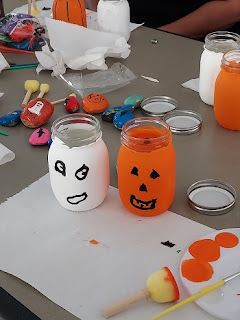 All the jars were cute, except for mine.

I set out to paint one jar like candy corn, make the other an evil pumpkin, but the finished products did not come out as I'd imagined.

Marie Kondo — the maven of organization, says that if an item does not bring you joy, get rid of it. Neither jar brought me joy so, when the session ended and I returned to my unit, I tossed them in the trash.

I enjoy learning new crafts, I have fun making things in Arts and Crafts, but rarely have I held onto anything coming from the sessions — past and current, as the items generally are just not my style.

At any rate, all that remains of my project is a glimpse of one jar in the group photo. 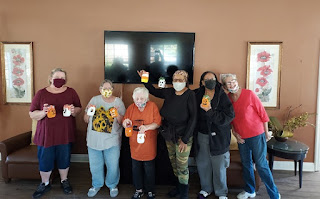 Some of you might remember the kitten that was saved from the engine of my next door neighbor’s car, and how I was concerned that the kitten was given to the resident that I suspected had done something to the puppy she adopted during the quarantine that caused the puppy to be put to sleep.

While we were working on our jars, that neighbor walked in to pick up a pizza. I greeted her and asked, "How’s the kitten?"

Her face lit up, and she began gushing about how sweet the kitten is, how the kitten has changed her life, how much she loves and is enjoying having the kitten.

I believe her. I felt her sincerity.

She had pics of the kitten on her phone and told me of funny things the kitten does, how it follows her around and is learning to use the kitty litter box.

So, those of us who were concerned can breathe a sigh of relief. The kitten is in good hands.

Posted by BootsandBraids at 3:08 PM