Turns out the results of the Mission Inn 5K, that I'd previously posted, were the Unofficial Results — my standings as I finished the course, but while the race was still on with other participants yet to be accounted for.

Official Results came in yesterday’s email and, when all was said and done, I was not 5th and last in the field of five in my age group 75-79.

I was 5th alright, but in a final field of eight in my age group, making me NOT dead last, even though I’d slowed and stopped to take photos.

I’ll take it — claim those stats.

In the Female category, my ranking increased to 541 out of 767, meaning I was 200 or so short of placing in the middle of the pack.

I did GREAT, even if I do say so myself.

Yesterday was cold, wet and rainy.

Yesterday was also to be Day 1/Phase 2 of the great inspection — the one where the inspectors were to enter random units.

That did not happen, and not just because it was cold, wet, rainy, but because management scared ‘em off.

When I returned from that weekend of attending an event that made life seem normal again — that is except for the mask and constant disinfecting of my hands, reality slapped me in the face.

There was a notice posted to the door indicating that a resident “has tested positive for Covid and is under self-quarantine”.

My spidey sense told me management was going to use this occurrence as an opportunity to get the inspectors off their backs and, sure enough, no one showed yesterday.

This occurrence couldn’t have been more perfect for management had they manufactured the situation themselves.

The notification went on to say “We have modified our property services in response to the progressing information and the CDC’s recommended guidelines”.

OH NO, thought I. That probably means the Community Room is shut down again, Tuesday's Arts and Crafts cancelled.

Funny thing though, today was bright and sunny, the inspectors again did not show and probably won't remainder of the week — end of the inspection period. BUT modifying services according to CDC guidelines did not include locking down the Community Room or cancelling today's Arts and Crafts.

I guess those words looked good on paper and were helpful in scaring the inspectors off. LOL.

Looking through the camera roll of photos I’d taken over the weekend, I see the pic of a cool car I saw along the route didn’t make the last post. 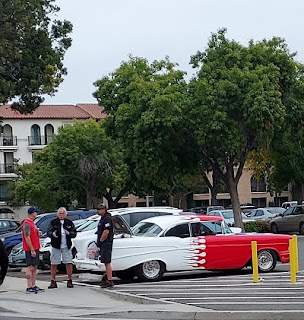 My guess is the white haired guy in the middle is the owner.

Another interesting fact I forgot to mention is that in addition to the Half Marathon, 5K, 10K there was a Walk and Wag Add-On.

Quite a few participants walked/ran with their dogs.

There was much barking, growling and unruliness, as the bigger dogs tried to get away from their owner, attack smaller dogs, so I don’t know if this first-time add-on will be repeated again.

I overheard a conversation where a mom asked her son if he’d had a good time, enjoyed running the race. He said he did, except there were “Too many dogs”.

I'm sure the organizers are going to catch some flack about the big aggressive dogs. If I receive a survey, going to suggest they limit the size of the dogs, because it was only the big ones that misbehaved, got aggressive.

I met one well-behaved doggie participate at package pickup, when his owner was picking up a bib for herself and one for him.

She planned to run/walk Toby in his cute Avenger Captain America outfit. 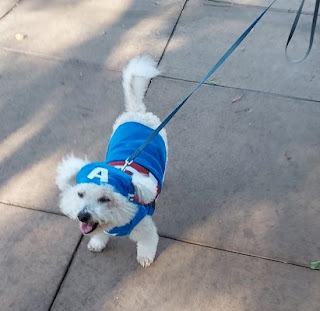 Posted by BootsandBraids at 2:37 PM