Having received a notice to be out by the 31st, because she’s been deemed over-income, I was surprised to run into the Talker this morning, looking like she had all the time in the world.

"I did, but now I don’t have to move. I was prepared to sign the lease tomorrow, but he (the Tyrant) just told me I didn’t have to move. There was a mistake in the paperwork. I can stay as long as I like".

What the heck is going on here?

I, who thought for sure I’d be kicked to the curb for being over-income, was told I don’t have to worry, it doesn’t apply to me. Now, after the Talker was put to the trouble of preparing for a move, she’s been told she can stay as long as she likes.

The reason she was given for this turnabout was that a mistake, in the paperwork, occurred at the Corporate level.

The mistake … if there was a mistake, is more likely to have been made closer to home — in our own front office.

So anyway, I’m glad for the Talker, I’m relieved for myself, but there are some kind of shenanigans going on.

Logging into Candy Crush this afternoon, I see they’d changed one of their candies into jack-o-lanterns. 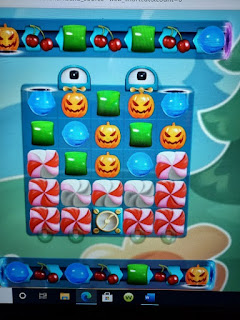 Cute, but doesn’t make passing the level any easier.

Not so cute, but scary fun if one does a lot of inside decorating for Halloween, is the peel and stick grate wall decal that popped up in my feed. 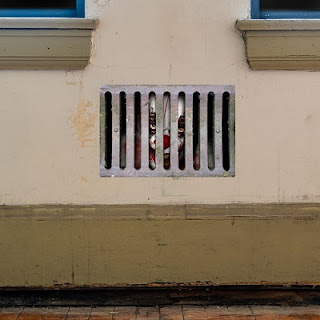 What would be hilarious, but wrong, is for someone to stick the decal to the side of a random building. Hide, then watch as passersby's freak out.

On another note, responding to JanF’s comment that she was amazed I could get three striped candy corn colors on my smaller toe nails … Jan, it’s accomplished by using wedge shaped nail sponges. 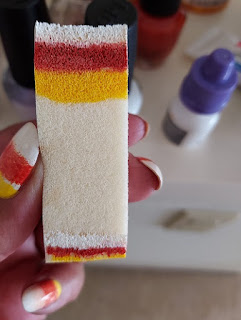 Posted by BootsandBraids at 3:31 PM