That’s Three of Us

Neighbor across the quad, corner unit, has been struck by the Halloween bug. 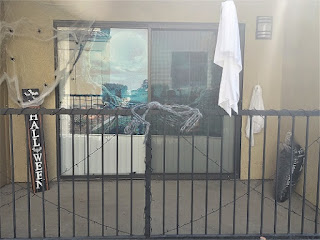 There's a spiderweb with baby spiders, a giant spider on the rail, couple ghosts, a window backdrop and, whatever that is over to the right I do not know, but it's not Halloween related.

That makes three of us out of eight in the quad (myself, Next Door Neighbor, the above neighbor). Insofar as the entire complex is concerned, all 178 units, I’m told there are only one or two elsewhere.

Some residents are too feeble and weak to be hanging up decorations. As for the others … oh well.

The lack of spirit around here doesn’t diminish my Halloween Spirit and, evidently, not that neighbor’s late spirit either.

I was locking the patio window last night when I caught a glimpse of flickering lights and decorations on her patio.

Throwing on a jacket, I headed out to check out the display, videotape it. Didn’t realize she was in the process of setting it up, until she made her presence known and asked my opinion on which light setting to use.


She's worried that the display doesn't fit the Tyrants parameters of  "family friendly". I told her we'd never been told that before, so ignore him.

So, unless there are other late participants, this quad is as lit as it’s gonna get.

My recertification appointment was 3:15 this afternoon.

In fact, when I asked Assistant Manager what the limit is for me, she said, “You don’t have to worry about that. It doesn’t apply to you. You’ve been over income for five years already”.

I still don’t understand how it works — especially with the Talker having to move out, but Assistant Manager explained it as only applying to new people and people coming in under the department of Housing and Urban Development. She didn’t use the words that I’m “grandfathered in”, but I gather that’s what she means.

At any rate, recertification is a done deal, a load off my mind, and I supposedly don’t have to worry about qualifying or not next year.

Prior to the session, I vacillated all week, and right up to when I was sitting in a chair in the Assistant Manager’s office signing paperwork, as to whether I’d give management a heads up that the repairs I’d requested had not yet been taken care of OR let them be roasted by the inspectors.

Not sure which way I’d go, I decided — whether or not my recertification went through, to wait for a sign during the meeting — something being said that would sway me to one side or the other.

That sign came when Assistant Manager had me fill in areas on paperwork a year or two old, because she’d failed to have me write-in this that the other on those old forms, saying the upcoming inspection included her files.

So, I said, “You’ve got worse problems than that, because the repairs I requested have not yet been taken care of”.

"We’re going to get to that. The guys are going around now, making repairs in the order they were requested. That’s why they’re so busy." Then with a worried look on her face she said, "I hope they can get to this".

Meaning … before the inspectors get here.

As for "in the order they were requested", my request was made early September, which means there are work orders they are now busting their butts to take care of before the inspectors check the maintenance logs, that were placed before September.

This last-minute pressure, on the part of maintenance, could have been avoided had everyone just done their job in the first place, rather than ignore.

The work orders they do manage to clear up, they'll probably backdate the date completed, to hide evidence of their ineptitude.

Evidently, management was given no advance notice the inspection was coming, until it was.

Posted by BootsandBraids at 5:30 PM