The Gods Must Have Been Angry

We’ve not had that earthquake as of yet. However, we did get thunder and lightning all afternoon, into the night yesterday ... in a dry sky.

That’s right. There was not a drop of rain. Just streaks of lightning flashing across the sky and rolling thunder.

Me thinks the Universe was very angry, and with good reason judging by all that’s going on in the world.

Then, along about 9:17 p.m. the power went out ─ no lights, no A/C, no Wi-Fi; and not just in my unit, not just in the complex, the entire neighborhood was pitched into darkness.

Maybe that squirrel blew out a transformer after all.

Fortunately, I knew exactly where the flashlight was and managed to get to it in the dark. Then, as I could hear neighbors coming out with their flashlights to discuss the situation, I got matches from that same drawer, lit the John Wick candle, crawled into bed and, with no Wi-Fi, finally had free time to start reading Randy Rainbow’s book. 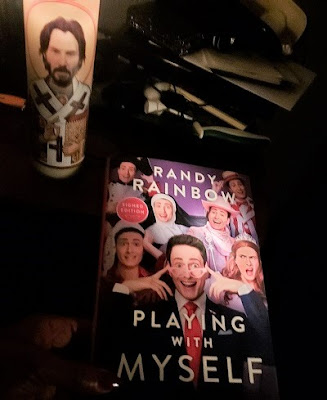 Expecting no power until morning, it was a surprise when I heard the A/C startup around 10:15 and the lights come back on.

At the part of Randy’s life where I was reading about what a tool his dad was — Dad was a hound dog, a poor provider and I don’t know why his wife didn’t just kick him to the curb, but I guess couples stayed together back then, even when they no longer loved or even liked each other. At any rate, engrossed in the story by then, instead of taking advantage of Wi-Fi being restored, I opted to keep reading until I felt sleepy.

The antibiotics I’d picked up yesterday began working immediately so, waking up this morning, I was inclined to cancel the office visit at the medical center, but inasmuch as I’d had so much trouble getting an appointment, I kept it.

Remembering not to drink coffee this morning, my BP was 125/54.

I liked the friendly cute little Black lady doctor I was paired with, I liked her nurse, so I let them talk me into a shingles shot, though I didn’t think I needed it and didn’t want it.

As for the folliculitis the over the phone doc had suggested, she said it wasn't that, looked more like I’d been out and about and something had bitten me.

I don’t see how since I always wear leggings when out and about — except I do wear shorts when going to the mailbox or taking out the trash.

So, it's possible, but even though I’ve been assured Moderna has nothing to do with it, my gut tells me it’s a delayed reaction to the last two boosters.

But whatever, the antibiotics are working and a hydrocortisone cream has been added to the mix, so I’m over it. I will, however, have to return to the medical center for the 2nd shingles shot.

When I got to the car to head to the medical center this morning, Talker was taking something out of the trunk of her car and had an update for me on Karen.

Another complaint has been made to the office about Karen, and it wasn’t from the Talker.

There is a guy who comes to bingo that I thought was new to the complex because I’d never seen him before, but he tells me he’s lived here a year and a half on the opposite side of the complex. He’s tall, got a good build, not a bad looker and doesn’t appear to be infirmed in any way, as so many men around here are, so I was expecting the women to swarm him.

And before you go thinking anything …… no, not me. I’ve neither the time or the patience to deal with anyone.

So, anyway, he approached Talker recently and said, "Your downstairs neighbor is crazy”.

Turns out Karen has been following him around, stalking him, writing love letters to him.

He said he’s been trying to avoid Karen, but she hunts him down. One day, said he, she saw him in the laundry room and, when he ran to get away from her, she ran after him at which time he went to the office with the letters, incidents of stalking and said, "I can’t take this".

I’d pay to see what Karen wrote in those letters.

Management has been talking a good game about doing something about Karen. They better follow through before it turns into a Fatal Attraction boiled bunny thing.

Posted by BootsandBraids at 2:50 PM