There was a surprise birthday party for Red Light at today’s Bingo event. 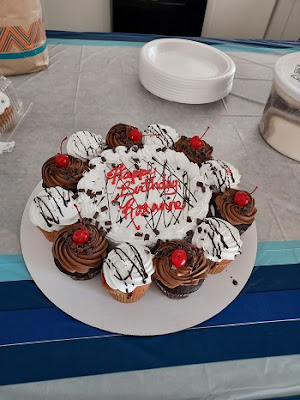 Surprised not only Red Light but me as well because no one told me. Had they done so, I would have contributed to the cake and ice cream or bought Red Light a present.

The Baker provided the cake made of cupcakes but, busy with doctor appointments as a result of her fall, she purchased the cake instead of baking it herself.

The usual suspects attended, plus there were a few additions — Not Dead Nancy joined us, as did the woman who had been hospitalized with Covid and then kept "forgetting" to wear her mask when recovered and was out and about on the property. Let's call her Caftan lady because she always wears a Caftan.

Conspicuously absent was the guy Karen has been stalking — let’s call him Dream Lover (DL), because that’s what he is to her.

Word travels fast, everyone knows about Karen stalking DL, so I asked around if his absence had anything to do with her.

No one knew the answer, why he was not there. The two women he generally sits with said they didn't know where he was.

After attendees sang Happy Birthday to Red Light, had cake and ice cream, the games were about to start when through the door comes Karen.

The room went still, all the air went out and I heard myself say out loud, "UT OH!"

My table mate Genie, feeling the energy in the room change, hearing my utterance and seeing the look on my face said "What? ... Who is that?"

My other table mate, our Painted Rock Lady (PRL), said "No. I invited her".

"I was trying to be a good Christian lady".

PRL is well aware of all the problems with Karen, in fact, it was she who warned Talker in the first place to be careful of Karen, because of things Karen was saying about Talker, trying to turn neighbors against her.

In addition, PRL knew that Talker would be in attendance, that Dream Lover usually attends and this time we had Talker’s brother — the one Karen had bullied at the gate. So, to tell me she invited her because she was trying to be a good Christian Lady is bull crap.

While these conversations were going on, Karen had been standing, looking around as to where to sit and saw the one who invited her — PRL, who had her head down, trying to be invisible.

Oh sure, she invites her and then tries to hide from her.

Something about the look in my eyes must have warned Karen off, because she sat with Not Dead Nancy and the Seer. After which, PRL, afraid to turn around and look, head still down, whispered "Where is she?".

"Right behind you, facing my way".

Karen seemed to gel well with the ladies at her table and, because of where she was seated, our eyes frequently locked.

Crazy people are not stupid. They know who to mess with, who to avoid and something about the way I looked at her when our eyes met kept her away from me. Even when she later walked around trying to be nice, even had a conversation with Talker who looked shit faced uncomfortable as she held in her disgust with her being present and anger at PRL for inviting her.

I didn’t wear my lucky shirt, so no surprise when I came close several times to winning a game but did not. Then, Game 9 came through for me and I selected a toolbox from the prize table. 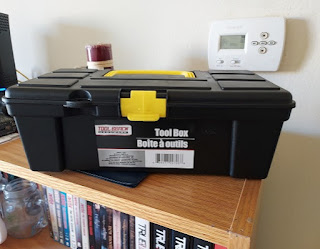 There are no tools in the box and I don’t plan to use it for tools, but to house some of my crafting equipment.

So that’s the tea of how Bingo went today — Karen is in, causing Dream Lover to now have to opt out — maybe Talker too.

And get this ….. Sitting straight in front of me, at the other table, I kept trying to get a photo of Karen, as this was the first time I've been close enough to see her face, but my camera kept malfunctioning — the images kept pulsating, fading in going dark, fading out, which I took to be her bad energy causing a disturbance in the force, in the operation of the light rays.

After several tries, even restarting the phone, I finally managed to snap a clear pic in-between the malfunctions. 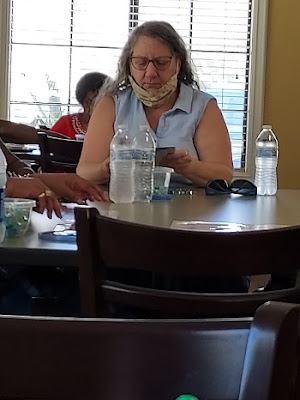 She’s looking at her phone. I wonder if she’s trying to get a pic of me too, for purposes of performing some kind of voodoo ritual. ROFLMAO!

Posted by BootsandBraids at 5:46 PM