There just is not enough weekend in the weekend, especially when today meant I had to leave my air-conditioned unit and face the wall of heat outside; but at least this week looks to be a lot less chaotic than last week — fewer must-dos to make me venture out.

Other than the MWF workouts, I’m only locked into a manicure/pedicure on Tuesday and dental cleaning on Thursday.

Since I suspect the dental office receptionist as being the person who’d hacked my credit card, charging $18 at Overstock, $13 at some Motor Club (thank the Lord it was timid small bites), I’ll be looking for signs of guilt — like not being able to look me in the eyes. I’ll also be paying cash. She how she reacts to that.

Activity Director has a Summer Craft class scheduled for Tuesday, which I’ll miss because the time conflicts with my mani/pedi but, if she stays true to form, the craft class was going to be cancelled at the last minute without notice anyway.

With no Bingo this coming Friday, and my heading out of town the Friday after — for the three-day Long Beach Pride Festival, doubt I’ll have any updates on the Karen/Dream Lover saga for a couple weeks.

Speaking of Pride, during the week I was reminded of how I used to take granddaughter to the Pride Festivals and Parades when she called to ask if I had possession of the book with the photo of her at Pride.

I do not. It’s one her mom has, but I’ll look for it while I’m in Long Beach.

Cute idea and the fact that she wanted something to commemorate the baby’s First Pride manifested itself because, when walking into a store to pick up a package the other day, stopping at the Pride display to see if they had anything that interested me, I lucked up on this. 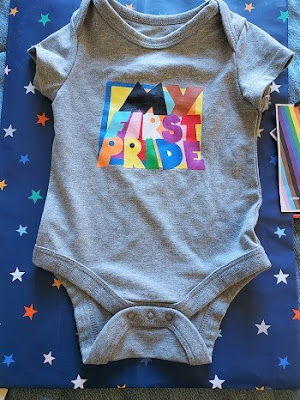 Posted by BootsandBraids at 3:49 PM