First off, the weekend went by so fast that I didn’t even realize it was over. Waking up around 6:15 this morning, I carried on as I would on a typical Sunday — screw around, do nothing, read blogs, only to hear the alarm on the phone go off at 7:00.

Why is the alarm going off on a Sunday, thought I.

I only set the alarm to go off on Monday, Wednesday, Friday as a reminder it’s a workout day.

Good thing I do because the alarm caused me to rethink what day it was. I suddenly realized Oh Nooooo! Today is Monday, not Sunday, I’d better get going — make the bed, run bath water, start breakfast, tune into Good Morning America.

Having sorted all that out I went about my business until I spotted a lizard (geico) sunbathing on the edge of my patio.

As previously posted, the lizard population around here is out of control. They’re lining the walkways and rarely can be motivated to move out of the way when I approach, prompting me to turn around, walk in a different direction.

On day, walking back up the stairs, I was startled into almost falling backwards by a lizard relaxing on the steps.

Those tiny little dinosaurs are hideously ugly and not a creature I appreciate being all over the place.

Over the last two days, I’ve twice seen a lizard on the wall by Next Door Neighbor’s patio, making its way to the roof and, around 9:00 this morning, I spotted one relaxing on my patio wall.

Can’t have that. Far too close to slipping inside, so I tried to encourage it to leave by banging on the wall.

Grabbing a water bottle, I tried to spritz water to encourage it into leaving.


That noise you heard was the patio screen being knocked off its hinges as I tried to quickly slam the screen shut so the lizard couldn't get inside. It’s down, a plant got tipped over, but at least the lizard is no longer on the patio ledge. He’s on the roof somewhere. 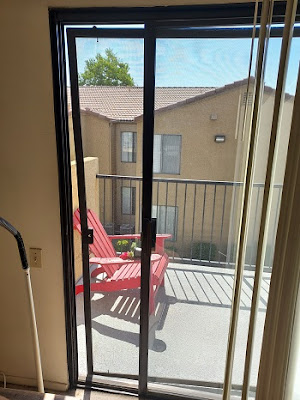 My attempts at getting the screen back on its tracks have failed so, no fresh air for me — with the patio window open, but the screen letting in air while blocking outside pests, unless and until I can get the maintenance guys to fix it for me.

I walked down and put in a work order with Assistant Manager but, a downed patio screen is not the level of emergency a gas leak taking down the building was, so I'm thinking I'll be old and gray before maintenance gets around to fixing it.

I took the long way around heading back to my unit, so I could check on that black box/lock.

It's still there, but someone has paid a visit to the unit since last I checked, because the blinds are now completely closed.

Posted by BootsandBraids at 11:06 AM