Heading towards this afternoon’s bingo, I heard a lot of loud talking coming from that unit with the black box on the rails — and yes, the box is still there. Not only was there a lot of noise, but quite a lot of people going in and out of the unit.

Hmmmmmm? thought I as I continued on to the Community Room.

Waking into the Community Room for bingo shortly before 1:00, more for purposes of reconnaissance than bingo, I observed the Baker’s daughter and a teenage girl standing in the room.

The teenager began to walk towards with me while, simultaneously, the Baker said, "Somebody wants to say hello".

It was then I recognized the girl to be my little friend, the Baker’s great granddaughter.

She’s grown so much since I last saw her about 3 years ago, that I’d not recognized her.


She’s almost as tall as I now, is a cheerleader, plays violin in the school band and a whole bunch of other stuff I can’t remember that keeps her busy.

After I hugged her, got a photo and a quick catching up, she was off — had only hung around for however long it was, waiting to see me …… Ahhhhhhh.

First order of business was to find out what’s happening with the smoking resident.

Turns out I misunderstood when Red Light said the yelling smoker lived behind her. It was the woman living behind her, a woman with lupus, who’d made the complaint. The yelling smoker is none other than my neighbor across the quad, downstairs, next door to Red Light — the resident I’d spoken of as having declined considerably since moving in due to bad luck and whiskey.

First, while in a crosswalk, she was hit by a car making a turn. That turned into hip surgery, recovering, then breaking an arm due to a fall in her unit.

She’s pretty much given up as other ailments have beset her, hasn’t come out of her unit since February of 2020.

She used to have a cat, but I haven’t seen the cat at the window since about the same time I last saw her two years ago.

How did I miss hearing the yelling when it was so close?

Asking Red Light if yelling neighbor is still smoking, the answer was "Yes. I can smell it", but she keeps her windows and blinds shut now.

Trying to keep the smell from wafting out and around, I suppose.

Good luck with that.

At any rate, yelling neighbor been given a warning that if she doesn’t stop smoking inside, she will be evicted. To which she was heard to reply, "I was homeless before moving in here, you’re going to make me homeless again".

No mercy from Red Light, who tells me, "It’s not management making her homeless, it’s her, because she won’t listen".

It hurts my heart to think she might end up on the streets in her condition, which I think by now might be depression and mental health related, but she can't continue to do what she wants to do.

It's not looking good.

So, anyway, before bingo began, the Baker asked for a moment of silence for the children slain and families suffering in Uvalde. Whereupon the resident in the wheelchair, that I'd posted singing a few posts back, began sobbing. Turns out the husband who died of a heart attack because he was so distressed his teacher wife had been killed, are both relatives of hers.

Bingo started off on a somber note.

Thinking it would bring me luck, I sat in the same spot as last time.

It didn’t bring me luck, because I didn’t wear the same shirt. It took until Game 7 before I got a win, but I was lucky in that the upstairs neighbor of that unit where the Marshals went in sat with me.

She said she’d heard about the Marshals going in and was just as puzzled as I but clarified that the invalid lady did not move out. She was gone for a while (don’t know why, don’t know where), but is there now — at that very moment; AND all that noise and people I saw are relatives of her coming all the way from Texas and Louisiana to visit her.

So, I guess there’s no more to be seen there.

As previously mentioned, I did win at Game 7 and, oddly enough, I yelled BINGO! at the exact same time as three others.

THAT never happened before — four winners, simultaneously shouting out BINGO!, and we all got to pick a prize. 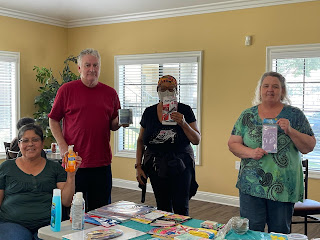 I selected a book light.

There was, of course, food during the break — sandwiches, chips, sodas.

A resident I don’t care for (I shun her because she earned it) made some sort of sandwich spread — tuna or chicken salad, and Red Light turned the spread into sandwiches. 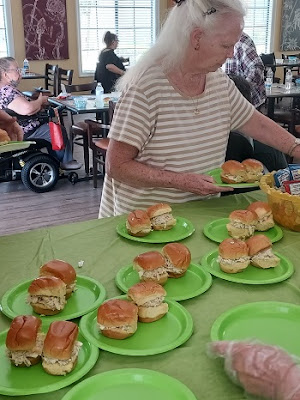 The sandwiches went quick, because some people will eat anybody’s food. Not me, not even if I could, because I don’t know how clean she keeps her kitchen, her unit, or herself.

Bingo's somber beginning turned into a party by the break, as Red Light put on a line dance instruction tape and tried to get residents involved.

Posted by BootsandBraids at 8:33 PM