PokémonGo has been a bust since September — no interesting new pokémon and a change that, in order to perform some of the functions in the game, the user has to give permission to link to the contacts in our phone — which of course I declined.

There’s still Tik Tok but, with no games with which to waste hours and hours, more time is now freed up for reflection and reading.

On Friday, Trainer and I were discussing the Depp-Heard trial.

He, like most, thinks Amber is a wackadoodle and Johnny is going to win.

I haven’t been watching the trial on Court TV because I just knew it would trigger my own past trauma but, what with clips of the trial on Tik Tok, Twitter and in the news, it’s hard to ignore the proceedings completely. So I'm familiar with some of the details, and Trainer turned me onto a tidbit I’d not come across — having to do with a text, read at trial, that Johnny wrote in response to a text from Amber that ended with his saying, "I have other uses for your throat which does not include injury".

Well, that peaked my curiosity so I researched the statement on TikTok and found women volunteering — shouting for Johnny to "Pick Me! Pick Me!".

Can’t say I blame them. Johnny is ruggedly handsome, charming, described by one news pendant as an "Aging Icon Idol" and better-looking IMO than his pretty boy 21 Jump Street Days.

At any rate, it didn’t take long for the words of that text to explode into a cottage industry offering of tee shirts, sweat shirts, drinking glasses. 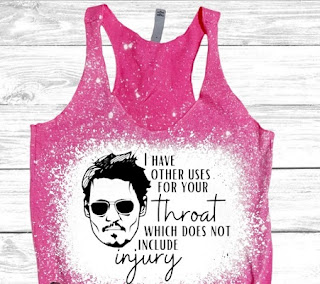 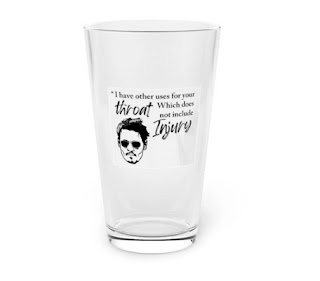 Not to mention a coffee mug I’m tempted to purchase. 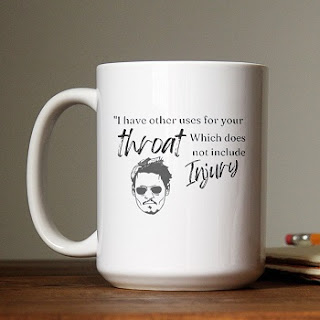 Only thing stopping me from purchasing is my distrust of the site offering it.

Last time I ordered an item off that site from a vendor in Missouri, two $1500 unauthorized charges showed up on my card from some fictitious company in, guess where ..... Missouri. So, much as I want that coffee mug, I’ll wait until it’s offered elsewhere.

As expected, what little of the trial I’d previously heard, plus other things I’d had on my mind, did trigger me. I took a trip down the rabbit hole for a while there into a blue funk, but I’m back from that place — without letting on to you guys I’d even gone there.

So now that I’ve processed what I had to process, my two cents is — Johnny is a bad boy, no doubt about it. A ruggedly handsome sexy charming bad boy. I was and still am a fan.

As for my thoughts on his being an abuser, I won’t say other than to speak from experience as to how charming and believable I know an abuser can be.

They are all skilled actors, these men who get off on abusing. They are skilled at playing whichever role the occasion requires when out in public, and with friends, coworkers, family members.

It’s just so easy for them to charm people into not seeing beyond whichever role they're presenting, which mask they're wearing at any given time.

Posted by BootsandBraids at 9:27 AM

Email ThisBlogThis!Share to TwitterShare to FacebookShare to Pinterest
Labels: Candy Crush, Crime, In the News, PokemonGo