I was watching People’s Choice Awards tonight — not because I’m into that award show but because Lizzo was being presented with an award and was sharing it with a few "special guests" one of which was Twin 1.

At any rate, Heidi Klum was a presenter and I thought the dress she was wearing looked a lot like Yannik’s style — Yannik being the contestant I’d pegged to win "Making the Cut" this last season.

Newsflash — Yannik did win, which makes the third season the designer I was rooting for actually won.

Why I can’t transfer that into picking winning lottery numbers, is a mystery.

So, anyway, I quickly google "Who did Heidi wear to the People’s Choice Awards" and got "Maison Blanche by Yannik Zamboni".

Do I know my designers or what.


Probably not to everyone's taste, but I like it.

Lizzo — there to accept the award of People’s Champion 2022, looked fabulous. 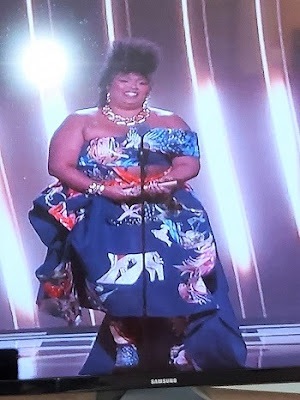 No idea who she was wearing.

Instead of accepting the award for herself, she wanted to "Champion marginalized voices" — share the spotlight with 17 Activists, one of which was Twin 1 (wearing designer Perry Meeks who did her Pride outfit).


Also, among the 17 were Maggie Mireles and Tamika Palmer.

Maggie is the sister of teacher Eva Mireles — one of the two teachers gunned down, along with 19 children, at Robb Elementary School, Uvalde, Tx. Maggie is now fighting for gun control.

Good luck with that.

Tamika Palmer is the mother of Brianna Taylor who was murdered in her bed by cops who falsified a search warrant and later lied to cover it up. Tamika fought for two years and finally got federal charges brought against those cops after local authorities failed to charge them.

After Lizzo did her emotional presentation of the 17 activists, there was no further need for me to watch the Awards show, so I tuned out, checked the Georgia elections and learned Hershel Walker lost to Warnock.

What a relief, and not for the reason you might think.

My relief has nothing to do with majority this, majority that — which I’m not politically savvy enough to understand, but because of the embarrassment.

The weeks and months of seeing Walker being paraded around by the GQP with his being — as Dave Chappelle put it "Observably Stupid", was just such an embarrassment.

It almost felt like the GQP was making fun of us People of Color, showing how ignorant some of us can be and how they like us like that — obedient and observably stupid.

Hopefully Walker lost the runoff because others saw what I saw, were embarrassed as I was, and felt sorry for his being made such a fool of.

Posted by BootsandBraids at 10:21 PM

Email ThisBlogThis!Share to TwitterShare to FacebookShare to Pinterest
Labels: Family, On TV, Politics