Down to the last chicken tamale I made early last month, having ground turkey in the fridge, I decided to switch it up by browning ground turkey, use that as a filling with taco sauce.

I didn’t have to run to the market for corn husks and masa harina, because both are a staple for me, always in the cupboard for when the mood hits.

I usually steam the tamales in the instant pot, but since it’s difficult to squeeze more than two/three in the pot, and it takes hours and hours and hours to steam a batch of about 24, I invested in the regular tamale pot seen above.

That 15-quart pot turned out to be waaaay too big for my kitchen and steaming only 24 at a time, so I gave it away and plan to pick up a 12-quart Rachael Ray steamer for when the mood next hits.

At bingo, Baker was asking if I could eat "Mexican Food" saying that’s what was to be served at the White Elephant Christmas Party. I told her not to worry because I’d bring something of my own.

Then I learned "Mexican Food" was to be tamales.

I should still have plenty in the fridge to reheat, bring as my meal by then and impress everyone with my ability as a tamalera.

Walking into bingo, I checked the prize table to see if that Olive Oil Decanter I’ve been lusting to win for almost two months was still on the table.

It was, but it looked like it wasn’t yet time to come into my possession because I came so close so many times to yelling Bingo and missed when the one number I needed was not called.

At least I had a fun table mate — Talker’s cute little 5-year-old granddaughter. 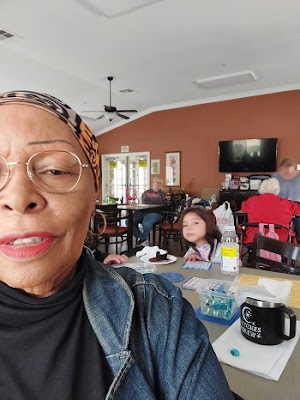 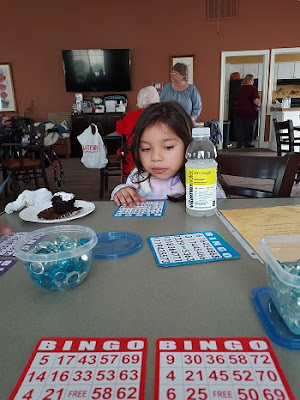 She doesn’t yet know her numbers, so Grandma Talker helped her out and she came one number short of winning a game herself.

When Grandma Talker won a game, she let the little girl pick out a prize. She chose a cute little wallet. 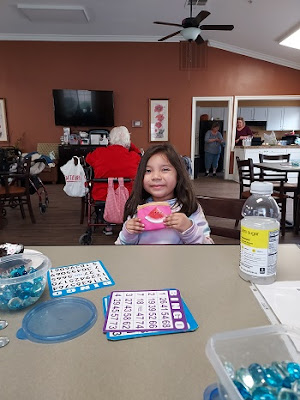 I had no cash on me, otherwise I’d have given her something to put in the wallet.

A friendly child, she hugged everyone her grandma introduced her to — some she came back on her own and hugged that individual multiple times.

It is a good thing R (the resident that won Halloween as a witch) wasn’t present, because she hates children.

I know of two times R was rude to a child being present. Fortunately, I was not present either time because I’m not afraid of R, as others are and would have said something — as I did when she was being rude, bullying a new Manager in front of a room full of residents.

I called her on it, which set off a thus far 8-year acrimonious relationship between us two wherein she’d turn up her nose at the sight of me, speak ill of me to others. I in return paid her no mind because I’d erased her. I would walk right by her here/there on the complex, look through her, not say a word to her.

She wasn’t accustomed to not being feared, being dismissed and two/three years back began trying to engage me when we’d pass on a walkway. It’s just been in the last few months, when she’s been showing up at Bingo, working even harder at trying to engage with me — greeting me when I walk in the door, say "goodbye" when I leave.

You all know by now, I can be a cold hard hearted beoch when the need requires. Once erased, you stay erased. So, I do not return the greetings, sit with my back to her at bingo.

So, anyway, I’m told that last time someone brought a child to bingo, R stood up, said "There’s a kid in here, so I’m leaving" and walked out.

So here the little girl was running around hugging everyone and fortunately R was not present or I'd have gotten in trouble again for standing up to a bully.

When it looked like she was heading to hug me, I got all Wednesday Adams on her, diverted the hug by telling her to pause for a photo with grandma.

She did, and the ploy worked as she forgot about hugging me, LOL.

Watching Wednesday on Netflix, I’ve learned we have that in common — Wednesday Adams doesn’t like to be hugged by strangers and, like me, she doesn’t care to have her birthday celebrated.

However, during the Blackout Game, I didn't notice when the little girl all of a sudden got up from her seat. She walked around the table, hugged me and put her head on my shoulder.

Caught off guard, I uttered a surprise "OH!" then "Thank you" and something told me my luck was about to change, that she’d just given me good luck.

I say this because, she’s somewhat of a miracle child.

Just before Talker moved into the complex, while Talker’s mom was still alive, the little girl fell two stories off the balcony of her Great Grandma’s apartment, hit the ground, and survived with no damage whatsoever.

I’m told that everyone was screaming and scrambling, expecting to see if not a deceased child a badly damaged one and found her to be okay. Not a scratch on her.

The little girl said, "Jesus catch me" — meaning she saw or felt arms catching her before she hit the ground.

And yes … an ambulance was called, she was taken to hospital, examined by professionals, who also found nothing broken, no internal or external damage whatsoever.

Lo and Behold, after she hugged me during Game 10, my cards began to cover rapidly as numbers were called until BINGO! I won the big game — Blackout. First time ever.

Recognizing she’d brought me luck, it was ME who initiated a hug with HER. 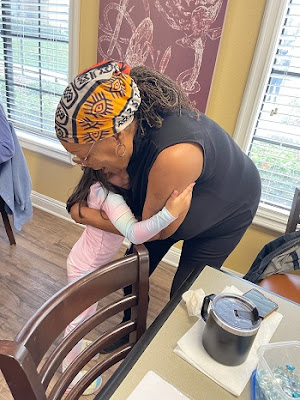 "Did Jesus tell you to hug me?" I asked.

Winning Blackout entitled me to pick a prize from the big table where all the larger and usually more costly prizes reside.

Seeing nothing I wanted, I asked if I could pick from the regular prize table, was told sure, "But three items instead of one".

Of course, I took the olive oil decanter I’d been lusting after, then a glass mason jar and told the little girl that since she was responsible for my win the third item was hers to choose.

She can’t yet read but chose a crossword puzzle book. Maybe she can color in it. 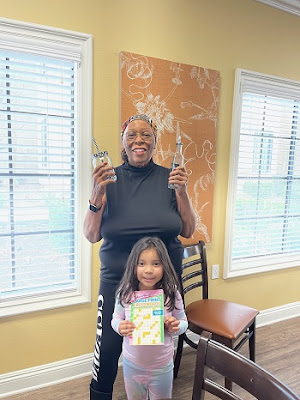 Before I left, she must have hugged me like a hundred more times. Yeesh!

Shortly after returning to my unit, switching into my warm comfortable camo onesie p.j.s to settle down, watch Judge Judy, there was a knock on the door.

It was she again, wanting to give me a hug before she left the complex.

Nice, but Good Lord! I hope this doesn’t mean she’ll be at my door every time she visits Grandma Talker.

Remembering her empty wallet, I gave her something that I keep on hand for special occasion gifting to mostly kids — a $2 bill. 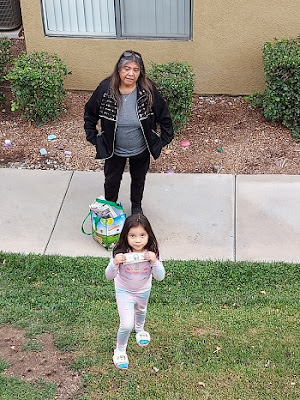 Posted by BootsandBraids at 9:37 AM