Walking into the Community Room, seeing the naughty number on the Talker’s birthday cake, I blurted out, "Sixty Nine!!! What kind of party is this?!" 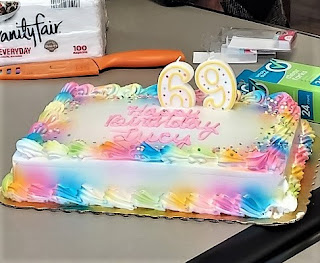 There was just a handful of us invited to the shindig, seven women and one male whose birthday had been celebrated just before I left for the week in Long Beach.

I had been invited to his party as well, was a no show and darn if he didn’t call me out on it, saying, "You were supposed to be there".

I don’t actually recall what time his party was scheduled for but my answer had everyone laughing which got me out of hot water.

It’s nice to be wanted, especially when so many others are not — including Red Light and surprisingly the Baker wasn’t invited but, as you all know by now, these back to back to back to back parties are just not my thing.

So, anyway, that one is behind me and I met two new residents — not exactly new to the complex, but new to me.

The two were rather insistent when everyone went around the table, divulged their birth month, and eventually got me to reveal mine.

Inasmuch as so many have tried to get that info out of me for years, the info is likely to get around. So I may have to make myself scarce when the time comes so I don’t have to deal with being celebrated.

Saying I had, I asked about the baby boy and learned fAD is 35 years old, expecting her first child, planning a wedding to the baby’s dad.

FAD’s mom is so excited about becoming a grandma that she’s retiring so she can stay home and take care of the baby when fAD goes back to work.

Red Light was just as upset as fAD at not being given any notice of her being transferred because the ladies were planning a baby shower for her.

Odd that Red Light was upset because, whereas the rest of us just complained about fAD to each other, Red Light had called Corporate and lodged a complaint about her rude behavior. Essentially getting fAD in trouble. Probably contributing to the decision to send her to a different property.

Looks like Red Light will still have an opportunity to plan yet another party — host a baby shower, because our new Manager (No. 10) is also expecting.

I did learn at the birthday party that the White Elephant game is still planned for the Christmas party, so we’ll see how that goes when the time comes.

Of course, I couldn’t remember a thing but fortunately I had backed up posts from when I first began blogging in 1997 on a different platform, under a different domain name, and located that day.

The post that day was titled I’ll Sleep When I’m Dead and below is the text of that post from 2013.

Finding myself wide awake at 1:08 this morning, I had thoughts of naming this post "Up All Night".

I’d gone to bed around 10:30 last night and, after reading a chapter of the fascinating read delivered day before yesterday, I forced myself to stop reading, turned off the lamp and was asleep before I knew it.

So why the 1:08 wake-up call is beyond me. It’s not like waking up regularly between 3 a.m. and 4 a.m. isn’t enough. And, though I admit to being annoyed at times, I choose to believe the 3:00 to 4:00 wake-up calls are a spiritual responsibility and a blessing rather than a curse because the 3:00 hour is the time when this part of the world is quiet so that the meditations (prayers) we do for others can sink into the stillness and be most effective. Consequently, I try to roll with waking up so early rather than be annoyed by it. Besides, I generally lay down on the couch around 6:00 and get two more hours of sleep. Except today I’ve got an appointment with the locktician and, thus, am going to have to plan for a long day of fighting drowsiness.

I had the same problem when I was still in the working world. Waking up between the hours of 3:00 and 4:00, meditating, but then having to get ready for work two hours later, was exhausting. I’d drag through the day relying on Starbucks coffee for energy. The caffeine worked – I was alert, aware and effective in my job but there were times when I was so high from two/three big cups to stay awake that you could have scraped me from the ceiling. And once I was so wired – twitching and jerking like a junkie and behaving so strangely that, when I stopped at the mall after work, someone reported me for suspicious behavior and I found mall security following me around.

At any rate, awake at 1:08 this morning, and thinking it might be a sign that someone I knew was in trouble, I sat up and meditated for all in my awareness, then turned the lamp on and read another chapter or two of the Elle Zober book. The book is so fascinating that it’s difficult to put down — I don’t want it to end, so I’m trying to read it in segments. But, taking it with me to the hair appointment today, I’ll likely finish the book by end of day – that is if I can keep my eyes open.

Along about 3 a.m. this morning, I decided it was time to get out of bed altogether and start my daily computer activities. While walking around getting myself acclimated it suddenly hit me – today is my birthday … my 69th birthday.

Not that I’m disturbed about the age. I’ve never really paid attention to the number. I am, however, a bit disturbed and a lot surprised that I’ve lived to reach the number. I always figured I’d be outa here at 39. I wanted to live just long enough to see my children raised then, one way or another, I was checking out.

Infinite Spirit had other plans, so I’m still here and what’s running through my head are all the things I’d have done differently if I’d known I was gonna live this long – like focused more on body image and finances, so I’d now be a slim trim rich beoch.

I don’t plan to do anything special to celebrate. Other than the annual lunch my homie Ras and I have, to celebrate our mutual birthdays during this astrological period, I generally never celebrate my birthday – for no reason other than my birthday has just generally been no big deal to me. Looking back at what I’d blogged in the past on this day, I find I generally forgot it was a birthday, was feted by daughter, or simply enjoyed some little something that happened which let me know though I was up in age, I still had the it factor.

In 2012, busy with making plans to free myself of that situation in Long Beach, I was making trips to Target for storage containers, where some guy stumbled and tripped on his own feet when he saw me and said, "WOW!". I’d posted THAT was a great gift for a woman on the day she turned 68 years of age.

In 2011, I was so involved in the pursuit of weight loss that I forgot my birthday until I saw the date pop up on the computer when I logged on after a morning walk.

My 65th birthday in 2010 was interesting in that, once again, I forgot all about it. Instead, I’d posted about having gotten an indecent proposal at work that day by a kid in his 20’s. He’d sent me an email calling himself a "young hunter" in search of a "cougar". And said that if I ever needed his "services" give him a call, and included his telephone number. Flattered and not wanting to hurt his feelings, I thanked him for the offer and said that he’d be at the top of my list if I became so inclined, then to myself I’d laughed and laughed and laughed and laughed cause, to coin a phrase, "Ain’t nobody got time for that".

In 2009, daughter gifted me with a DVD/VCR player.

In 2006, daughter gifted me with a Mystery Cruise (she’s always been the thoughtful considerate one in the family).

And in 2005, my homies Ras and Angie and I celebrated our mutual birthdays by taking an introductory pole dancing lesson at S Factor, up in Hollywood. Ras and Angie were in their late 20′s/early 30′s, I was turning 61.

So there are no plans to celebrate or even care that today is a birthday — and I don’t mean it in a negative connotation. When I was a child, I would have been hurt had my birthday not been cause for celebration. As an adult, it just doesn’t seem all that important. I just wanna get my hair done and go back to bed.