Two Insults in One Message

Today started off funky, with the results of yesterday’s blood draw — sodium levels are high and Cholesterol/HDL/LDL are off the chart. The Medical Record sums it up as "Morbidly Obese" and having "Fat Blood".

Two insults in one message.

"Fat Blood"??!! … what does that even mean and, hopefully, the vampires won’t find out about it, because it sounds like something they'd like and they'll want some.

You readers have seen photos of me. I’m not a Size 1, but I’m having trouble accepting myself as morbidly obese, so I’m just gonna let that one slide.

Of course, attached to the results, are suggested measures to not be morbidly obese with fat blood.

Suggestions include eating all the things the Gastro Specialist indicated I can no longer eat, such as fruits, whole grains, beans, nuts, soy products, because I’ve developed an allergy and it was those foods causing my gut episodes.

I’m also to limit sodium and alcohol — which I thought I was limiting sodium using pink sea salt, and I don’t drink.

Also, I’m to limit drinks and foods with added sugar.

I haven’t had a soda in a decade and, except for the occasional See’s Candy (which I have no intentions of giving up), sugar has for years been substituted with Stevia (the plant-based sugar substitute that I was using long before Walter White/Heisenberg made the product infamous in Breaking Bad).

In addition to the above, also added to the cure is to “Be physically active. Try to do moderate activity at last 2-1/2 hours a week. Do not smoke”.

Working out — in one form or another is my middle name, and I've never smoked. So, from my point of view, I’ve been doing everything right, insofar as my gut issues will allow, and it's all going wrong. I'm getting negative results.

It’s frustrating, confusing, and bummed me out a bit this morning because, what I see as my options, in order not to be “morbidly obese” and have “fat blood”, is to go back to the foods that make me ill.

I’ll be cramping and puking my guts all day, but I’ll lower my cholesterol and maybe get thin.

So that’s how the day started but, after a good workout in the Pain Cave, I was ready to put those results behind me, get groceries at the other store and move on.

Pulling into a parking space at the other market, I saw the cutest little car parked facing me. 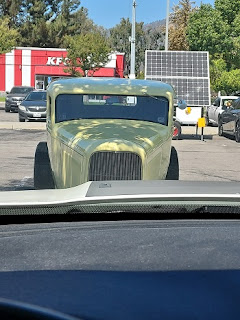 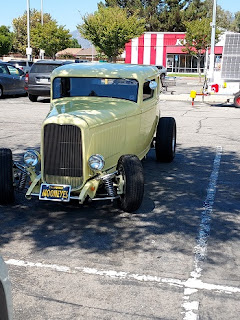 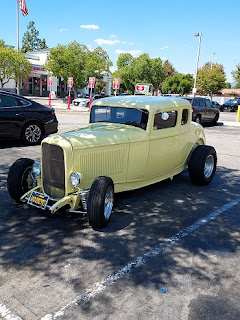 Leaving the market, I heard sirens, saw fire and rescue passing by, and observed helicopters above.

Correctly assuming there was a fire nearby, I returned to the complex to find it was just down the street from the market, near Walmart, and it was bad — quickly spreading to 50 acres, causing those living near the area to evacuate.

On my way to pick up mail, I managed to get photos (not good ones) of the billowing smoke from the fire. 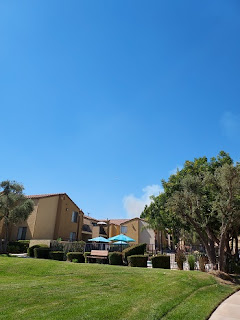 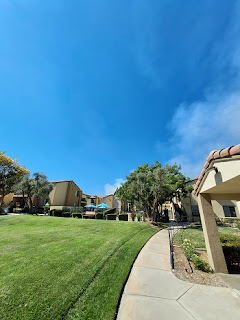 I also finally ran into Jan, the painted rock lady. Told her I was the one who’d taken the bible verse rocks, said I was impressed with how neatly she managed to get an entire verse on the rocks and asked how she managed it.

"Carefully", was her response.

Jan is all excited about being admitted to the hospital next week for knee surgery, which she feels will enable her to walk without use of a walker.

I don’t know how safe it is to be hospitalized and have surgery during this pandemic, but I wished her a successful surgery and speedy recovery.

Posted by BootsandBraids at 3:49 PM