I had a change of heart and gave Trainer today off.

On Friday, when Trainer asked if I’d planned to workout on Monday, my reply had been “Yes. That is unless you have plans”. He’d said he had none, but then asked me to change my time, come in as early as I could get there — which I said was 10:00.

After thinking about that conversation, I realized he really didn’t want to open up the studio just to accommodate my little 30 minute morning workout, but didn’t want to let me down because he’d had that daughter situation which caused his taking off last Monday.

Feeling guilty about taking him away from his family, I texted that I’d changed my mind, was giving him today off, that I’d see him Wednesday.

So here I sit with leisure time — no errands, no reason to get dressed, go outside, face the world until Wednesday — just nap, catch up on recorded television programs, needlepoint, detox from humanity.

And speaking of humanity, when I stepped outside to take out the trash yesterday, Next Door Neighbor was coming back from the pool. Here was my opportunity to ask if she'd had problems with the market's security guard.

I was a little hesitate to ask, afraid I'd put my foot in my mouth because one just never knows who can be trusted in discussing others.

We've had incidents here when folks have gone out of their way to start trouble by tattling to so and so what this one said, what that one said.

When the grapevine leaks a tidbit to me, I don't repeat what I've heard to anyone around here. I blog about it, LOL.

So not knowing if that security guard had charmed Next Door Neighbor, as he seems to have charmed everyone he works with and other customers with his faux friendliness, it was a risk to bring him up, but I took the risk, asking if he'd ever said or done anything to make her feel uncomfortable.

She said he greets her with "hello" when she walks in, but that was all.

So why am I the unlucky one?

And when I say "faux" friendliness, I mean this guy is smart. He knows how to play the game, how to manipulate people.

It's like what you see in the news and on television, when neighbors learn that the guy down the street who was so friendly, so helpful, so pleasant, turns out to be a serial killer. At first, neighbors are all in denial, angry he's been charged ... "Oh No, not Charlie. I don't believe it. You've arrested the wrong guy. He was always so friendly, so helpful, so pleasant".

Yeah, sure. That was the image he fed you, so no one would suspect he was a bad guy, and you bought it.

At any rate, I'm over it. I'm too old for this kind of crap.

And speaking of crap women deal with, in tonight's TV viewing is Harry & Megan: Escaping the Palace. In the promo for the movie, Megan is asking us viewers a question.


Even though, spiritually speaking/Dharma, there are no mistakes, my answer is YES.

Knowing now what she did not know then, experiencing what she's had to endure, Megan probably would have given more weight to what Princess Diana and Fergie said they'd gone through, and chosen NOT to get involved in that Royal Family.

At any rate, I'm off to start this leisurely day with pancakes for breakfast, made TikTok style.

A creator came up with a hack that, instead of stovetop, bake the batter in the oven 450 for 15-18 minutes … in a sheet pan, cut the cooked pancakes into rectangles.

She added chocolate chips and berries to her batter. 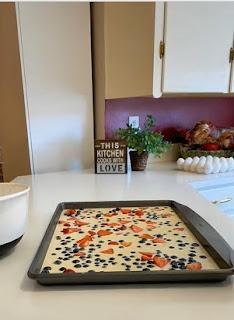 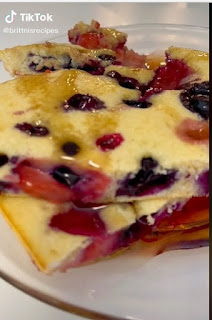 I'll be adding blueberries and bacon to mine and, with a full sheet pan being too many portions for me, I'll be using a small cake pan, but I'm putting a half sheet pan, maybe even a quarter sheet (if there is such a thing) on my shopping list.

Mine may not turn out as pretty as hers, but you can't mess up pancakes and it will be nice not to have to slave over a hot stove on Labor Day.

Posted by BootsandBraids at 8:02 AM