After an estimated 400 plus hours, I’ve decided I do not like the needlepoint project I began in May. 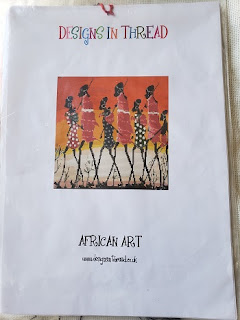 I’ll power through to completion, but won’t be gifting to Twin 2 because I can now see it’s not her style.
Of course, she’d appreciate and be happy with the piece, because it’s something made by her mom ─ she’s sentimental like that. But I’d rather gift her something I’ll be happy with knowing she absolutely loves because it fits her stylish sophisticated elegant style to a tee.
Like this ..... 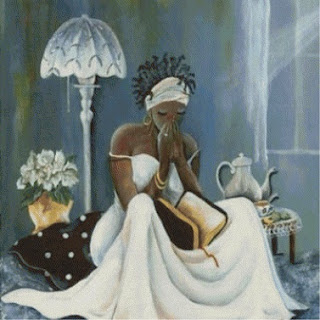 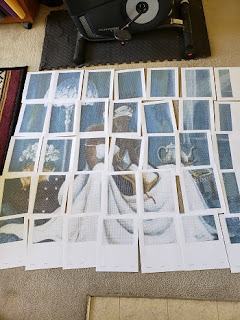 With such a huge undertaking, not the planned Christmas gift this year. Looking to be such a long-term commitment that not the next year or the year after that either, but Twin 2 didn’t know I was making a needlepoint for her. Plus, I’ve already gifted her my lottery winnings to pay off a rather large tax debt she’s been struggling to get off the books. So I consider myself covered for Christmas and Birthdays for many years in advance.
LOL.
I will finish the piece I’m now working on, but then gift it elsewhere.
Back in 2016, Apache so liked a piece I was working on that he offered to purchase. 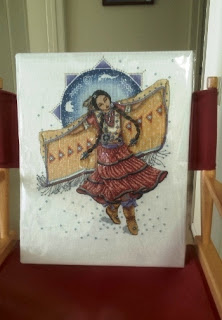 No way was I ever parting with that ─ one of my favorites, but I did knock out and gift him with a canvas I thought he’d like. 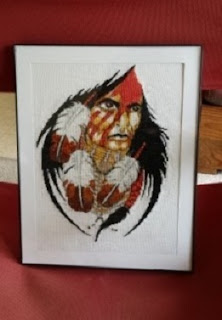 Apache was so happy with the piece that he had me sign it ─ like I’m a famous artist or something. ROFLMAO!
Then, in 2017, the Seer was admiring a piece I was powering through to finish, even though I’d decided halfway in that I did not like it.
Seer was pointing out all the little details she liked in the piece, so I said to her, “I don’t like it, do you want it?”
The answer was an unequivocal yes.
And so that piece now resides in the Seer’s unit. 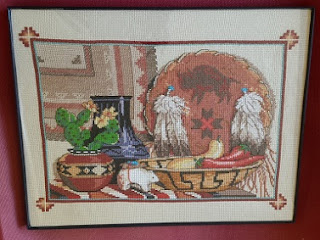 As for the current project, it doesn’t fit Twin 2’s aesthetics, but it absolutely SCREAMS Twin 1’s urban Afrocentric style.
Not being the expressive type, Twin 1 will accept it, she’ll like it with a smile, but I’ll not be getting an over the top OH MOM! type thing her twin is known for.
I know my children .... even though they don’t think I do. LOL.
On tap for today is to stay in, out of the heat, and not run the errands I need to run. There’s always tomorrow, Saturday and Sunday, to catch up if need be.
According to the Activity Calendar, today is also “Employee Appreciation Day”.
The office is closed.
Staff has been given the day off.
So, of course, with no staff out and about that dang smoke detector began beeping a little while ago.
It hasn’t been long since the Sunday I had to call after-hours maintenance for battery replacement, so I can only assume maintenance is using lousy weak dollar store batteries.
Expecting the smoke detector to begin once again screwing with me, when no staff was available, I paid close attention to how the smoke detector was disconnected that time.
I am so not having it today that I pulled out my step stool, in preparation for disconnecting the unit my own darn self.
All of a sudden, the beeping stopped.
Did my resolve scare the smoke detector? Is there a devilish entity in the mechanism or what?
At any rate, I’m leaving the stool at the ready, just in case. 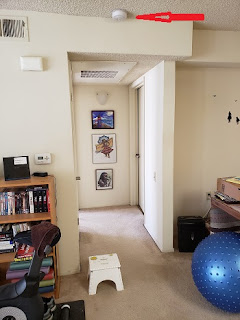 Posted by BootsandBraids at 11:36 AM