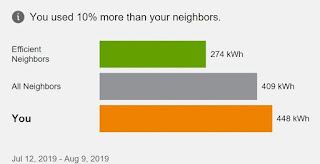 I don’t know what the energy company expects me to do, as the heat has been unrelenting this summer. 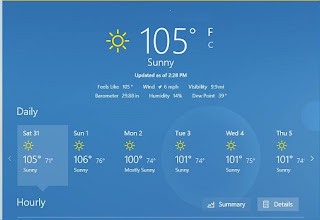 I wake up in the morning and it’s already 88˚ … inside. So, of course, I turn on the A/C and run it all day out of necessity.
I’d mentioned before that some of the seniors camp out in the Community Room all day, where it’s nice and cool, to save on their energy bill. But I’m not willing to spend my time like that. Besides, even when I’m not home, I run the A/C so as not to come back to a sauna inside, and because I’ve an idea the heat will have a negative effect on the electronics ─ television, laptops.
At any rate, the energy company is charging me plenty for this so-called overuse. No need to also energy shame me.
Having put off errands yesterday, I had no choice but to head out in the heat this morning to get the more “pressing” matters off my to-do list.
Running out of groceries ─ no problem. I’ll make do.
Needing to replenish makeup ─ also no problem. I’ll stretch what I have out until I can schedule a trip to Macy’s.
Running out of avocados and/or craft supplies ─ I'm immediately on it. So, this morning’s “pressing” situations that sent me out in the heat was just that ... Trader Joe’s for avocados and Stevia, Michael’s for aida cloth and floss.
We all have our priorities. LOL.
The price on avocados is holding firm at $2.50 each.
I’d passed a Farmer’s Market last weekend, pulled over to see if they had anything I wanted and found their avocados were going for $3.50 each. 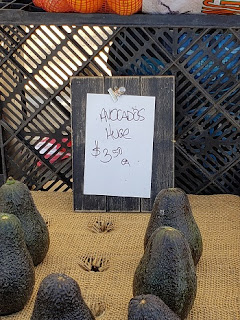 And they don't look that great. So, no thanks.
Instead of a Michael’s Crafts nearer the complex, I’d driven all the way out to Redlands, because they have a Barnes and Nobel a few doors down.
I popped in to pick up the September Issue of Marie Claire because Twin 1 was to have been featured. 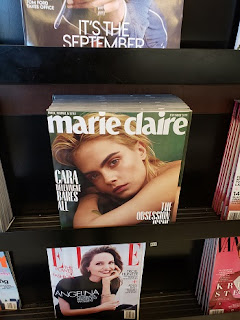 She was.
But at $6.99 for the magazine, and her “feature” being a mere blurb, measuring two square inches, I kinda sorta regret the purchase.
After all, what’s the point of continuing to add to the Creative Memories Scrapbook system, when anything future generations wish to know about any one of us can be found online.
Posted by BootsandBraids at 3:34 PM