Started off the week by lying to Trainer.
When asked this morning if I’d done my exercise homework over the weekend, I readily confessed to being a no show at the 5K, then lied and said I’d instead gone walking around the campus area when I’d not stepped outside the unit, hardly even gotten off the couch.
I just don’t have the energy right now for anything other than my normal training days so, though I don’t like lying, feel bad about it, I’ll probably lie to Trainer again. Probably when he next asks if I’m working out on the indoor bike.
Truth be told, the only one on the indoor bike lately has been Detective Pikachu. 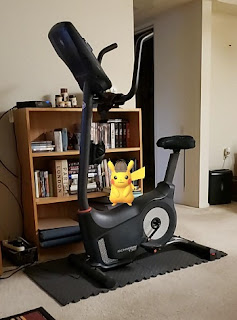 I’m not a person accustomed to lying, not good at lying but, until I get back into the swing of things, practice will make perfect as I don't want to insult trainer by saying I have no energy, when his training is supposed to be giving me energy. It's an emotional drain having an impact on my physicality, and I don't feel like getting into explaining what's bothering me to Trainer. So pants on fire lying it is.
On my way to the Pain Cave this morning, I spied what looks to be signage structures going up on the lot where Starbucks is being built. 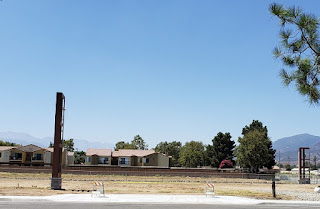 “I don’t care about any bleeping signage” said Trainer. “Get Starbucks built already”.
LOL.
That seems to be the prevailing sentiment around here, as the excitement of Starbucks steps away builds.
It’s not like there’s not a Starbucks to the East of us, about a mile away AND another to the West of us, also about a mile away. It’s the convenience of having one within walking distance that has everyone so anxious to see it done.
I myself am up to 1-1/2 cups of butter coffee a day. With a 1-cup coffee maker, that has me making coffee twice a day, and I’m pretty well sick of having to do so. But I’m trying my best to hold off purchasing a 2-cup coffee maker in the hopes the new Starbucks will hurry up ─ 1 cup butter coffee in the morning, and a walk to Starbucks in the afternoon.
We’ll see if I can hold out.
Also tempting me are the Panda Inn Szechuan Hot Chicken Strips.

Do you recognize the dance moves and song?
It’s the old 90’s Billy Ray Cyrus’ song/dance ─ Achy Breaky Heart.
Loved the song back in the day, still love it, but the dance was so complicated that I never took the time, in my Line Dancing Days, to learn it.
At any rate, after this morning’s workout, I stopped at the market, picked up some organic chicken tenders and my foray into the kitchen this afternoon is to switch ingredients around to turn a Paleo Bang Bang Chicken recipe into the equivalent of Panda Inn’s Szechuan Hot Chicken.
Where there’s a will, there’s always a way.
Posted by BootsandBraids at 4:09 PM

Email ThisBlogThis!Share to TwitterShare to FacebookShare to Pinterest
Labels: In the Kitchen, Neighborhood, Pain Cave, PokemonGo 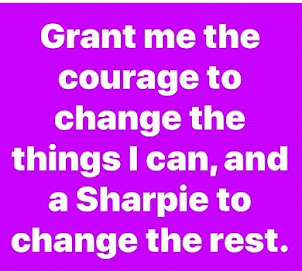