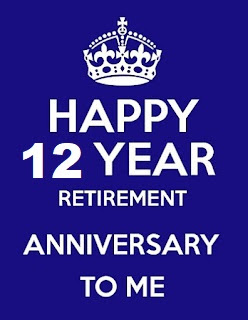 Time flies when you’re not being badgered and bullied by some racist agency CEO and his complicit Klansmen/Klanswomen or screamed and yelled at by the Law Firm’s Environmental attorneys because they’re functionally insane and can’t control their madness.

This retirement was hard earned and though I never looked forward to retirement (I loved the work I was doing even though I didn’t sometimes care much for those I was working for), never thought retirement would happen for me.

Looking at my future back then, I envisioned myself as this little old lady who one day just keeled over dead at her workstation.

Suddenly, like a bolt out of the blue, the Agency lost a lot of its funding and there was talk of layoffs to balance the budget. I was 99.99 percent certain of being exempt from layoff, so I wasn't worried. In fact, I was actually hoping, like other employees, that I would get laid off. I'd have missed the paycheck but getting laid off and collecting unemployment seemed somewhat of a blessing in disguise at that time.

At any rate, to see if they could get enough people to leave voluntarily in order to offset some of the layoffs, management sent out an offer of an early retirement package to all staff.

The offer was so minimal that most staffers were insulted, and it was felt no one would take it. I, on the other hand, crunched the numbers.

Realizing I was in a position to take the offer because I lived simply then (still do), that though finances would be tight it was doable, I saw it as an opportunity and accepted the offer.

It's been so far so great ever since.

It was the right decision then and, looking at all that’s happened in the world since — pandemic, declining job market, rising cost of living, et. al., it was a smart decision.

I don’t even want to think of where I’d now be had I let that gift — wrapped up as a voluntary retirement package, slip by.

Posted by BootsandBraids at 10:19 AM