If You Build It, They Will Come

Just before we had that flash flood, I noticed a red flashing "Open" sign across the street.

Long time readers may recall that across the street was formerly a vacant lot, and not just a vacant lot but also home to Tent Guy.

I admired Tent Guy’s ingenuity. Here he was a homeless White guy, with one arm, yet he managed to camp out in the lot undisturbed late night/early morning in a tent, while I wouldn’t dare to risk even walking out my door during those hours in this area.

No one ever complained about him living there, which was a feat in itself because some of these old ladies complain about everything going on in the neighborhood that doesn't meet with their approval and the police never hassled him.

Maybe it was that the police never spotted him because, except for when they’re having a lunch party at the pizza place on the corner, the police are rarely seen in this area.

It may also be because Tent Guy would take the tent down in the morning, roll everything up and go elsewhere during the day.

Then one day Tent Guy disappeared.

He wasn’t friendly, didn’t like to be bothered, didn’t appreciate our looking out for him -- wanting to take food over, etc., but we still kept an eye out that he was okay. So, not seeing him that day in the lot, nor walking his usual route while I was out walking or driving, I got worried, asked around and learned, from a resident that attended the same church as he, that he’d been blessed with a car and shelter.

Tent Guy’s timing, on getting a car and shelter, was perfect because shortly after there was a For Sale sign posted to the land. The owner was looking to sell the property for purposes of development.

That was around 2018, and the sale and development has taken us to present day where the build is flashing a red open for business sign. 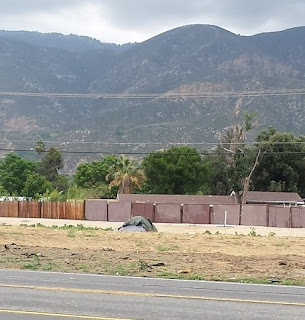 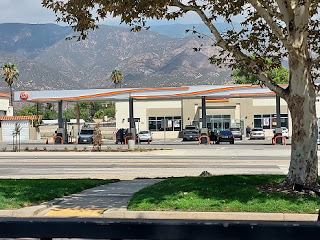 Of course, the complaining old ladies were not happy with the build as it went along — still aren't, saying putting anything on the lot was just going to draw traffic, cause accidents, give the homeless and drug addicted a place to hang around, but their complaining didn’t stop the train and, thus far, I’ve seen no problems caused by the build.

I also didn’t see anything going on that would indicate the flash flood caused any difficulties.

A Circle K with a gas station and car wash isn’t the Gentrification I’d hoped for — I’d wished for a Starbucks and a Gym (but that was before I found Trainer and had to give up Starbucks due to gut issues).

The good news is a Circle K isn’t something to write home about, so it won’t cause our rents to rise in the way Gentrification would have.

In fact, back in 2019 when news of a Starbucks being built just steps away from the complex reached us, our rent went up $49.

Inasmuch as we’d not had an increase in three years, I’d called it the "Starbucks Effect".

When Starbucks reneged and a 7-Eleven went up inside, the $49 didn’t go away.

We did have that recent increase, but I don’t think the Circle K caused it. More like Corporate was jumping on the bandwagon of property owners everywhere increasing rents because they can.

Posted by BootsandBraids at 10:46 AM

Email ThisBlogThis!Share to TwitterShare to FacebookShare to Pinterest
Labels: Neighborhood