A Face in the Crowd

That challenging Mission Inn 5K — the one with the hills, that I completed in 2021, is coming up soon — Sunday, October 23.

Hoping to improve on that when the 5K rolled around this year, I’d been training on hills in my workout sessions at the Pain Cave; but then the excessive heat we had got to me and dizzy spells arose that caused me to slow down, go back to basic training — no hills.

Blood work gave me an idea of why the dizzy spells. Unfortunately, I was unable to take the pills the doctor prescribed because my gut couldn’t handle pills (they made me sick for days). I was also not able to take the holistic vitamin cure (500 mg Tri-Chromium capsules, B-50, 1000 mg B-12, Atomic Iodine) again because my gut couldn’t handle the vitamins. Consequently, I’ve been using food as a cure — fewer eggs for breakfast, added rolled oats with blueberries, walnut, half a banana instead. Also switched from white potatoes to red and incorporating more salmon to the menu.

Feeling stronger and better already, not to mention down 10 pounds, I went online this morning looking for a local 5K to test my readiness and though I didn’t find anything, I did see a face in the crowd of an old 5K advertisement that looked familiar. 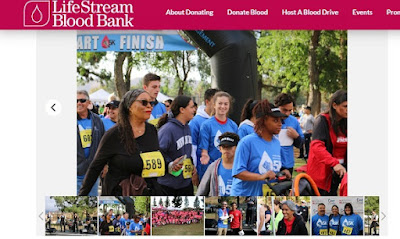 I’m tempted to just go ahead and register for the Mission Inn 5k, trusting that I won’t get dizzy, fall over or pass out on the course, but I’m getting a retake on the fasting blood test this Thursday, so I’ll wait to see if my numbers have improved using food as a cure instead of medicine or vitamins before I commit.

Other than that, I’m just making a few Fall upgrades to the unit — new shelf paper, new rugs for the bathroom, new denim quilt for the bed.

Next Door Neighbor is also making Fall Upgrades. Saying same as I was thinking, that since we can’t afford to live anywhere else, at least keep this space comfortable, she called me over to help her decide to keep or return a new purchase as the wrong color had been delivered.

I wish I could have taken a photo of her unit to show you, because it’s so beautifully decorated — like a museum.

There’s not a wall not decorated with some kind of artwork — mostly African in nature. In addition to the normal couch and eating area, she has a huge glass curio cabinet in one corner, a computer and television station set up in another corner, and yet it doesn’t feel cramped or crowded.

She has exquisite taste, and her unit shows it.

What she wanted me to look at was a huge glass mirror that was supposed to match the glass curio cabinet but didn’t because she’d received the wrong color.

She was thinking of having the maintenance guys paint the wall in a color that would allow the wrong mirror to fit in, but I told her it would clash too much with what was on the other walls and the curio cabinet, send it back.

Last I heard, she was sending it back, but it was interesting to learn we can request our units be repainted — at a cost to us of course.

I don’t need a paint job, but good to know if and when I do.

If you think Next Door Neighbor is in a better position than Red Light so that she can make her unit ready for a photo shoot by House Beautiful, you’d be wrong. She came in under the same welfare program Red Light did. She just has better taste, better than me even.

We are currently getting flashes of light in the sky — lightening.

With Halloween Wars, Halloween Baking Championship and the big finale of Big Brother on TV tonight, I'm praying our power doesn't get knocked out.

Posted by BootsandBraids at 6:32 PM