Last week was a lot — Excessive Heat Warnings, Flash Flood Warnings, Wildfires, Ukraine, Mar-a-Lago, Steve Bannon, The Queen, 21st Anniversary 9/11 Terror Attack. In between was waiting to see how the cops were going to spin away the latest trigger-happy cop murder of an unarmed person of color under the category of Sleeping While Black (Donovan Lewis, Columbus, Ohio).

I did read something hilarious about Mar-a-Lago, which Michael Cohen pronounces as Mar-a-Lardo because it more appropriately describes the physicality of the bulbous orange guy.

What I read was that because it’s become clear that serving as one of No. 45’s attorneys is a risky job, the joke among lawyers is that MAGA stands for "making attorneys get attorneys". 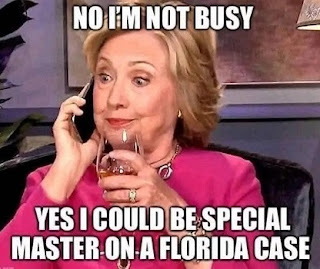 I haven’t a clue what if anything has been going on blog worthy around the complex, because of all the above happenings. I did put in a few hours on that never ending needlepoint project. I also put in some time on that clutter management project I began last Monday.

Focusing on items taking up space, not serving a purpose, I got the Starbucks coffee cup collection and other miscellaneous whatnots down to a manageable level. Not that anything went anywhere because, not ready to part with those things, I just moved them from general population (everywhere) to solitary confinement (packed in clear containers, stored in patio storage area).

That alone cleared up a lot of cabinet space and is a good compromise to weeding stuff out so, if anything happens to me, family won’t be burdened. They’ll find a lot of containers, but it’s a lot less hassle to move containers, set aside to investigate contents, than it is to pack stuff up, decide what to take, what to toss.

While at it, I finally did something I’ve been wanting and planning to tackle for like forever …. organize the junk drawer.

Bibbidi-bobbidi-boo. Believe it or not, I can do magic because, other than craft items that belonged elsewhere, mostly everything that was in the drawer before is still there, just better organized.

Eventually, I’m going to have to make some decisions about all the containers previously placed in the outside storage area, to make room for more containers, but not any time soon.

Posted by BootsandBraids at 7:30 AM

Email ThisBlogThis!Share to TwitterShare to FacebookShare to Pinterest
Labels: BlackLivesMatter, Clutter Management, In the News, Politics