I think it was Wednesday when, turning into the driveway, I glanced over at the office building and thought to myself eerie.

There appeared to be no light coming from inside and the building looked dark and foreboding.

Head Maintenance Guy (HMG) is the only staffer I’ve seen on the premise, and he has been unusually busy.

HMG being not one to hustle, it’s odd to see him moving at warp speed ─ zipping this way, zipping through the property that way, working his normally lazy arse off, no temp employee helping him out while his assistant is in quarantine.

THAT’s telling me something is up.

Is the entire office, with the exception of patient zero (HMG) in quarantine?

That possibility was somehow reinforced when, returning from the Pain Cave yesterday, a resident blocked my path and asked if I knew why the office was closed.

She went on to say the front doors were locked, and there’s a strange car in the Assistant Complex Manager’s (ACM) parking spot.

I look over and there was indeed a strange car in ACM’s spot. As to the front office doors being locked, well, duh, thought I as I pointed out “the building has been locked ever since the pandemic began”.

”No …They left the front open for us to drop off paperwork”.

I did not know this, and it doesn’t make sense inasmuch as we’ve been mailing in our payments, but I don’t doubt her word. It’s just the kind of oddball thing management would do — post a ton of notices about doors to the office being locked, then leave some doors unlocked.

At any rate, I didn’t recognize the neighbor I was speaking with. That is, until she pointed out she parks right next to me.

So now that she’d caught my attention, she was difficult to shake off, as she recounted many of what others, including myself, have had to say about living here. That’s it’s a nice property, the units are great, it’s a friendly place, but management sucks, i.e., they don’t fix recurring problems, it’s difficult to get maintenance to respond to issues but, all in all, it’s better than other places looked into, plus it’s affordable.

She, like I, had a long standing issue with her smoke detector and though, knock on wood, I haven’t had any problems with my detector since maintenance finally got around to connecting the wires properly and pushing it back in place, she said she’d handled the annoyance differently. When no one showed up to stop the beeping, she called the Fire Department. They actually responded saying something to the effect her detector hadn’t been serviced since 2015.

I don’t know what that means but, when management learned the Fire Department had responded, they replaced her smoke detector quick fast and in a hurry.

Embarrassing management by calling the Fire Department seems the way to go, so if and when there’s a next time, I’ll know.

When I say this resident was difficult to shake off I wasn’t kidding.

After I’d gotten out of the car, instead of heading to my unit, I’d intended to take the long way around to pick up mail. She’d blocked that path so, after talking to her a bit, I began slowly edging my way to my unit. She edged along with me, moved when I moved, still talking. We ended up at the opposite end of the walkway, past my unit, under the shade of a tree ─ where she pointed out her unit, which happened to be downstairs and across from evicted Cat Lady.

She had a lot to say about Cat Lady, because she too had been victimized by her.

Evidently, it was a normal thing for Cat Lady to bang on this resident’s door (let’s name her The Talker) 11 o’clock at night yelling, “Give me my cats!” — “Always 11:00” she said.

With no way to get around the The Talker ─ now blocking my path to the mailbox AND my unit, I politely listened as she told me her entire life story .... Problems with family, how she was always there for family members when they needed someone to be, but no one was there when she needed someone to be.

Been there, done that.

THEN, she tells me that she has a brother now in hospital with Covid. That, when she’d last visited that brother, he'd failed to tell her that he’d been tested and the test came back as positive. That, she’s okay now, but didn’t feel well for a few weeks after.

I’d gotten a little lax while listening to her chatter on. She was wearing a mask, we were having this conversation under the shade of a tree, and I’d say I was in the three feet range. HOWEVER, upon hearing this news, I slowly began backing away from her, away from the shade of the tree and into the sun.

”Is that sun burning you?” she asked.

In actuality, the sun was kicking my arse, but I needed the distance until I could finally politely terminate the conversation. Which I finally just said, “Look, I have to go. I need to pee”.

I picked up mail, headed to my unit, sprayed myself from head to toe with Lysol spray.

On another note, during the week seeing a cleaning crew on the property, a carpet cleaning company, painters and watching a transformation taking place in the ugly window facing my patio, I realized I was incorrect in thinking that window was the rear of the unit of the woman who passed away a few weeks ago, and her husband — the nice old guy who was Cat Lady’s last victim.


It wasn’t. Instead, it’s the side of Cat Lady’s unit, which the ugly curtains make more sense because it fits her  style ... deranged.


What a relief. Much more pleasant view.

Now if I just didn’t have to look at Next Door Neighbor’s new butt ugly doormat. 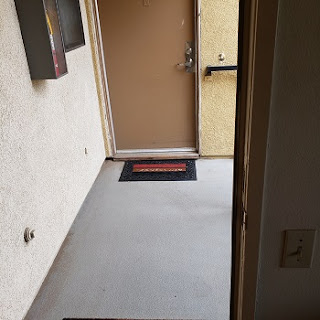 Posted by BootsandBraids at 11:23 AM