Returning from Sprouts this morning, I observed movers clearing out the across the quad, upstairs, corner unit.

Resident in that unit is a nice woman, active when she first moved in November 2015, but changed a lot since — most of the seniors do, and not in a good way due to loneliness and inactivity.

However, in her case there was also smoking and drinking to excess.

Since the pandemic began, I’ve only seen that neighbor once — let’s call her Sue (because that’s her name and now that she’s moved there’s no need for a pseudonym); and that one time I saw her she was in terrible shape — hunched over, slowly struggling along towards a waiting car outside the gate. She’s not old enough to be walking that way, so I assumed her lifestyle was taking a toll.

Not that there really is an age where one should be walking that way, and I don’t exactly know how old Sue is, but something tells me she’s nowhere near my age.

At any rate, Next Door Neighbor (NDN) tells me that yes indeed, the smoking and drinking has impacted Sue’s appearance and health to the point where she can no longer care for herself and is being moved in with family.

Being with family, not alone in her unit with cigarettes, booze, a mean little dog that never stops barking, the occasional visit from other drinkers in the complex, may be a healing environment for Sue.

That’s two vacancies: one a quad over … the one Cat Lady was locked out of, and now we’ll be getting new blood in our quad — new to us, but old in age.

NDN also tells me she ran into The Seer in the Laundry Room, and it was not a pleasant experience. The Seer, evidently, is still in her evil stage and, according to NDN has lost a lot of weight.

That’s not good for two reasons. The first being, The Seer wasn’t overweight to begin with so, losing a lot of weight is not a good sign. The second being, and I kid you not, waking up three days ago, heading out of the bedroom, I suddenly had the thought “J____ (The Seer) is next”.

That’s a weird thought, I said to myself as I stopped dead in my tracks thinking it to be a death premonition. Then, I shook my head to get the thought out of my head.

Instead, I heard myself say to myself, “I don’t care. Doesn’t matter. We haven’t been friends for a long time”.

I’m not wishing ill on The Seer, it’s just that I no longer care if the premonition turns out to be true, and won’t miss her.

Other than the above, not much going on as I tune into the news, watch the royals implode and Sharon Osbourne come out of the closet .......... as a Karen. 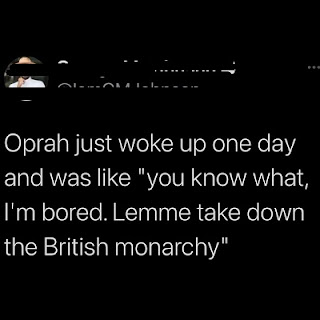 Evidently, the world isn't done with Bernie either,  because I saw, on facebook last night, that he's been turned into an emoji.

Posted by BootsandBraids at 6:23 PM

Email ThisBlogThis!Share to TwitterShare to FacebookShare to Pinterest
Labels: In the News, Neighbors, Racism, Spirituality