An interesting obituary popped up on facebook last night. 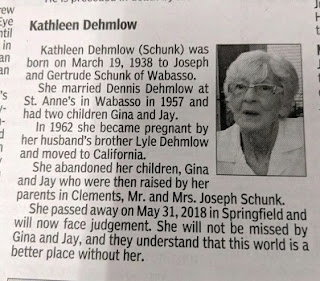 I did a little research and learned the obit is not new, it was published in 2018, but it brought up discussion as to how unusual it is to speak ill of the dead.
Why? I wondered. Why is it we tend not to speak ill of the dead … “ill” being the truth. Instead, the practice is to put the best possible face on a person in the obituary and overlook whatever misdeeds or characteristics might be unpleasant.
Reading comments to the post brought up a memory from when my ex-husband passed away.
I did not go to the funeral. It never crossed my mind to go. He was in the past. I didn’t hate him, nor did I like him. He was nothing, a non-entity to me. Did not exist.
I was ex-wife No. 2 of four — the only wife to give him children. He’d tracked me down and developed a relationship with his daughters when they were 10 years old, so the girls went to their dad’s funeral.
And, actually, it wasn’t that he tracked me down to develop a relationship with his children. Instead, after he tracked me down, he had his best friend call me at work and say something to the effect, “George is older now, wiser. You’re not getting any younger. You two should get back together”.
I scoffed and said "I'm not dating anyone over 25. What would I want with that old man? (he was only 15 years older than I), but if he wants a relationship with his children, that's fine by me".
Because he was in his daughters' lives after that, our paths crossed, but it was friendly and at arm’s length on my part while he was deluded and acted as though he felt I might still have feelings for him, even when he remarried …. twice more.
Sometimes he tried the poor me approach in trying to draw me back in .. AS IF, at one point telling me, when our paths crossed, that Wife No. 3 had left him. He’d returned from work one afternoon to find she was gone. Took ALL the furnishings with her.
In the telling ME of it, I guess he’d forgotten I'd also fled, and knew why No. 3 had left — but at least the only thing I’d taken with me were the clothes I had on my back and the babies. LOL.
Then there were a few times during his time with Wife No. 4 — whom I liked quite a lot, when George would feel melancholy, try the poor me thing again — once calling me at work, talking all sick and sad and sorry, saying he wishes we’d stayed together. (Yeah, sure. He was so crazed back then that he’d have killed me, the twins and himself). At any rate, I’d steer him back to reality, tell him he has a nice wife (meaning one who puts up with his awfulness, or was at that time) and should be happy.
So it was nothing to me when he passed away — while separated from Wife No. 4, but his girls, having developed a relationship, went to the funeral. And let me just add here the relationship they developed was not close. They got to KNOW their dad, could see why he was nothing to me, and even began to not like him all that much themselves. The girls just accepted him as being their dad and, consequently, were not happy when he passed away, nor were they devastated. It was more like … it is what it is.
Being his only children, they were fawned over by his old friends at the funeral and came back reporting that those friends — who had been our friends when we were married, were surprised I’d not attended.
I was surprised those former friends were surprised and said to the girls that “My time is valuable. Why would I have wasted it going to your dad’s funeral?"
Evidently, I wasn’t the only woman who thought he was a waste of time, because the girls reported that when the minister was eulogizing their dad — saying what I do not know, but probably the usual b.s. sugar coating ministers do to not speak ill of the dead, that a woman in the audience stood up, said “That’s not the George Raines I know!” and walked out. LOL
I wondered why she’d bother to attend — maybe to make certain he was dead, but it made me wish I had gone. Sounded like a lady I would have liked to have introduced myself to, had a chat over coffee with.
Posted by BootsandBraids at 2:06 PM 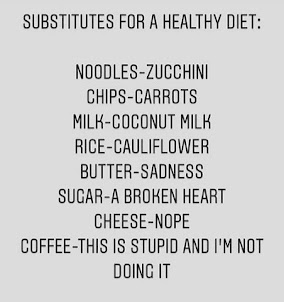